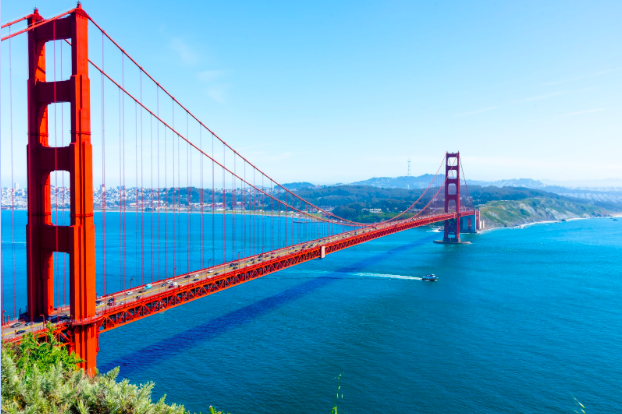 San Francisco is arguably one of the prettiest and most exciting cities in the United States. Situated on the sunny east coast, in California, San Francisco is the second-most densely populated cities in the US. Founded by Spanish settlers, the city grew rapidly during the gold rush in the late nineteenth century.

The city is known for its liberal attitudes, it was a popular hippy haunt throughout the late sixties, and was the center point of the summer of love. The gay rights movement also has strong links to San Francisco.

Here are the essential things that you must do and see during your visit to the city by the bay.

The bridge is one of the most famous landmarks in the entire world. The Golden Gate is a strait that connects San Francisco Bay with the Pacific Ocean. Often covered with fog, the channel was the gateway to the Californian gold country.

The bridge was completed in the 1930s and was the longest and tallest suspension bridge on earth. If you go to San Francisco without taking a photo of the bridge, nobody will believe you went.

Take a boat out to Alcatraz Island, home to one of the most notorious prisons in history. A mile and a half out from San Francisco, the island was once a military fortification, before being used as a military prison. Eventually, in the 1930s, it became a federal prison that was used to house inmates that may have been problems in regular penitentiaries. It was used up until 1963. Famous inmates included Al Capone, Machine Gun Kelly, and the birdman of Alcatraz Robert Franklin Stroud

San Francisco has four Chinatowns, and one of them is America’s oldest. There is a festival in the autumn that is well worth a visit.

If you’re a fan of Disney, then you really should visit the Disney Museum. You can see all of the 248 awards that Walt won during his lifetime, as well as lots on the history of the famous animation company.

San Fran has the last manually operated cable car system still in use across the whole world. Primarily used by tourists, there are three lines that you can ride on.

There are some great exhibitions in Frisco, including the Museum of Modern Art, The Palace of Fine Arts and the Asian Art Museum. You’ll get plenty of cultures, and can take in the works of Andy Warhol, Jackson Pollock, and Francis Bacon.

Wherever you go in San Francisco, you are guaranteed to have a great time. Take your time and make sure you soak in the scenery, and the hospitality.