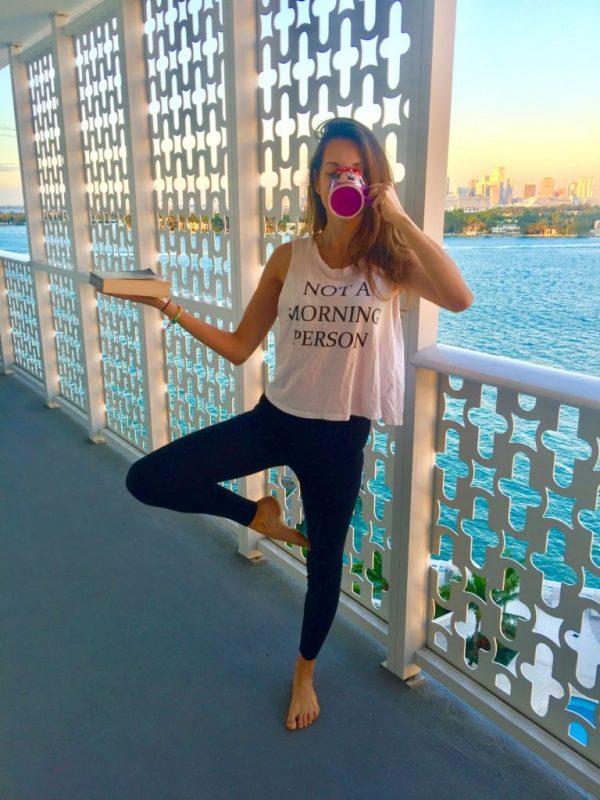 Wake Up: set an alarm and wake up early. You are going to need some extra time before work, before the kids wake up, before your significant other wakes up. So put yourself as a priority for your morning routine and wake up a few minutes earlier.

Oil pulling and follow with a glass of room temp water with lemon. It’s a little thing that doesn’t take much time but brings amazing health benefits!

Exercise: I do 5 mins minimum of Yoga, something quick and effective. I have a set of poses that only take a few minutes. I feel so much more awake and relaxed throughout the day when I do yoga very early in the morning.

Coffee: It feels like a little reward after my yoga flow. I hear the coffee brewing while I’m breathing and stretching and the smell fills the air. That first sip of fresh coffee and coconut milk in my dark quiet apartment is a precious moment.

Read: I read a short devotional from “Experiencing God” or “My Utmost for his Highest”. Something short that I can think about for the rest of the day and will hopefully help my soul conquer the day.

TIP: Don’t open your phone. Don’t check emails or social media when you get up. Resist!

John Piper, famous and successful Theologian calls his morning routine ”Prime Time, it’s the time to put first things first. He wakes up early in the morning before the sun is up. He reads his bible and “feeds his soul” before getting dressed and going to work.

Ana Wintour, the editor-in-chief of Vogue magazine and arguably one of the most influential women today, starts her day early, before 6am and plays tennis.

Jerry Seinfeld is among the most successful comedians, actors, writers of our time. He continues to create comedy at a remarkably high standard. He says that his strategy involves 2 things. Morning Meditation (finding quiet time away from screens and people) and daily consistency. He said, “You want to be a better comic? Write everyday. After a few days, you’ll have a chain. Keep at it, and you’ll like seeing that chain grow. Your only goal is to not break that chain.” Don’t break the chain (whatever your talent is) and be diligent.

As you can see, some of the most successful people have consistent morning routines. They involve getting up early, being active, and feeding your soul. Start developing your routine right now. Don’t hesitate to comment or message me if you want any help with building a solid morning.