I’ve got an Aussie animated treasure for you this December that the whole family can enjoy. And you don’t even need to drag everyone to the movies to watch it! This awesome movie is called “Back to the Outback” and it premieres globally on Netflix December 10th 2021! 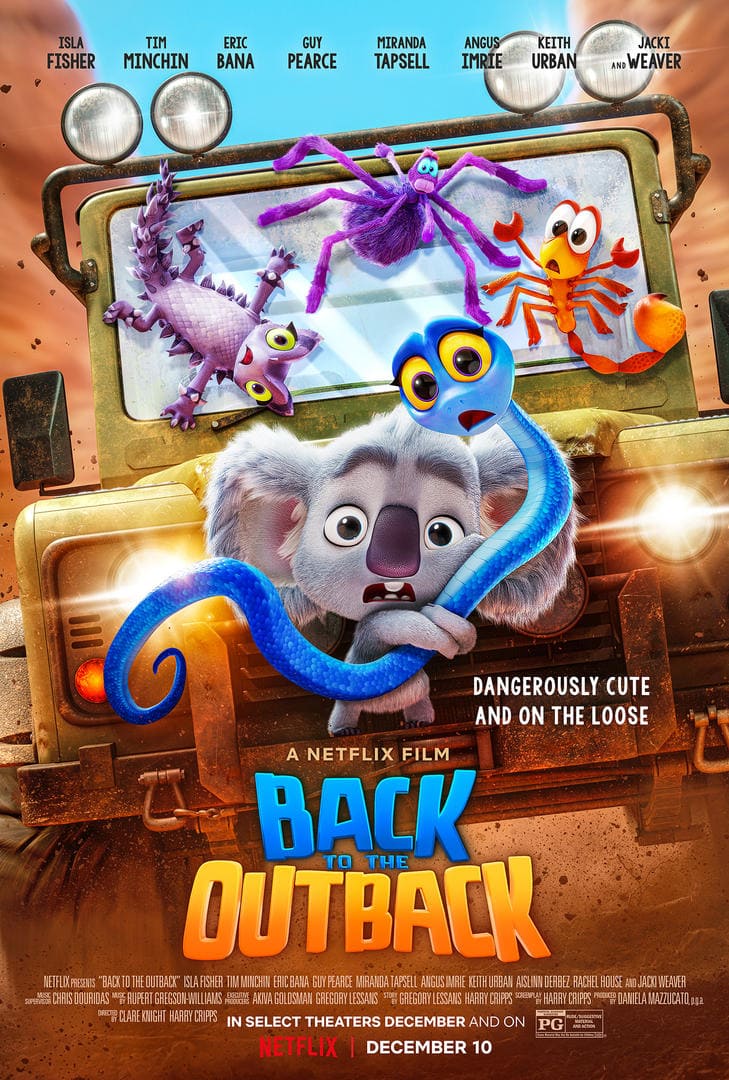 Back to the Outback | Netflix | Storyline

The main characters are tired of being locked in a reptile house where humans gawk at them and see them as monsters. This ragtag group of deadly Australian creatures escape from the zoo and head out to the Outback seeking acceptance.

Leading the group is Maddie, a poisonous snake (voiced by Isla Fisher), who is followed by Thorny Devil lizard Zoe (voiced by Miranda Tapsell), a lovelorn hairy spider Frank (voiced by Guy Pearce), and a sensitive scorpion Nigel (voiced by Angus Imrie).

Through a few unfortunate events, their nemesis joins them on the adventure – an adorable but narcissistic Koala — Pretty Boy (voiced by Tim Minchin). 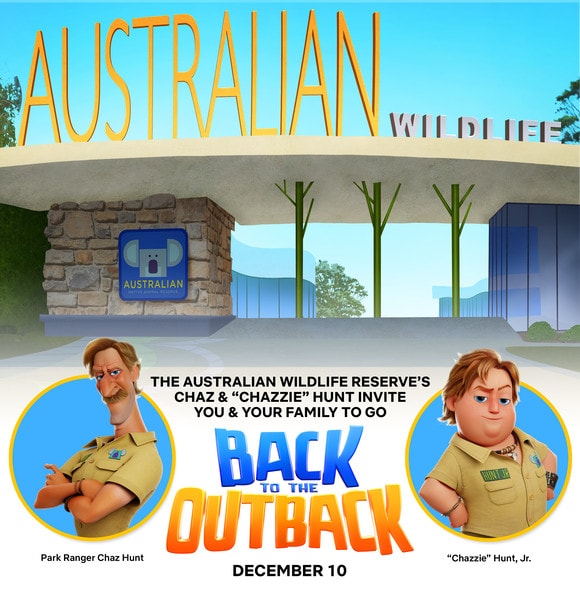 This daring adventure through the insane Australian landscape brings humor and heart as the story development entertains the whole family.

Look out for the special celebrity guest feature voices of Rachel House, Keith Urban, Celeste Barber, Wayne Knight, Lachlan Power, and Jacki Weaver! I know you recognize some of those names! (Dear, Celeste Barber, I love you, you’re hilarious and I wish all the success you can possibly handle!)

Back to the Outback | Netflix | Director Interviews

Back to the Outback is directed by Clare Knight and Harry Cripps. I had the honor to interview both of them and wow I have so much to share!!! 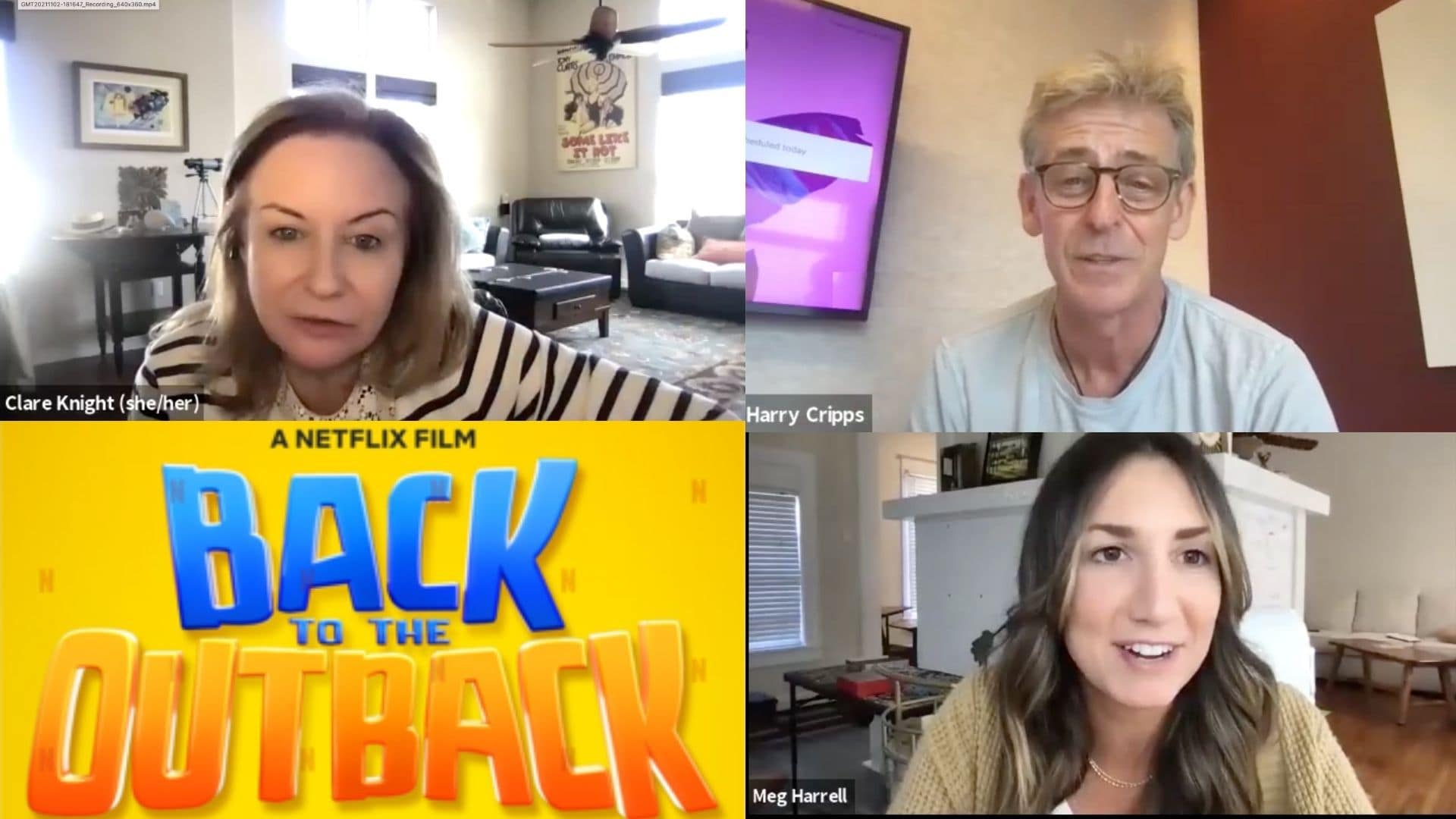 Clare Knight told me that she hopes this movie helps children (and adults) learn to be proud of their differences and love who they are. Harry Cripps added that in the movie there are animals who are feared for their differences and we all need to change these old rhetorics and redefine who is family and what is home.

Who knew there was so much thought and introspection behind a kids movie!

It’s fascinating to talk to the creators and then watch the entire film. You always get a better appreciation for everything that was put into it!

I do want to add that *maybe* just *maybe* there is a character that was loosely inspired by the great Steve Irwin. Watch it and then let me know who you think it is!

Back to the Outback | Netflix | Cast Interviews

Back to the Outback features the talented voices of Isla Fisher & Tim Minchin. I had the honor to interview both of them and I’d love to share their insights with you. I think it will make watching the film even more fun. Listen up!

Isla Fisher voiced the adorable character Maddie, the kind-hearted taipan. The song in the film was REALLY sung by Isla Fisher! I had no idea she could sing! I was so impressed! Wait till you hear it!

I also interviewed the great Time Minchin. Tim Minchin is such a talented human being. He is a writer, director, musician, comedian, and voice actor. Wait till you hear all about HOW he recorded the voice of “Pretty Boy” over the pandemic and what he found “refreshing”…

I was surprised to learn that he wasn’t originally casted to play this part. His dear friend (and director of the film) contacted him to write the song for the credits. He did such a good job, everyone thought he NEEDED to be the permanent voice of the character! And voila, he did a fantastic job! It’s the cuddliest villain I’ve ever seen!

Back to the Outback | Review & Family Recommendation Score

Ok so real talk, would I recommend this movie for the whole family? Short answer – no. Long answer…here we go.

This 1hr and 32minute movie is just the right length for a kids movie. My kids are over 5 and under 10. The beautiful imagery and plot kept their attention the whole time.

Back to the Outback is rated PG for “action and rude suggestive material”. I totally agree with this rating. It’s definitely one you want to watch WITH your kids, just in case. There is some cartoon violence and adults consuming alcohol. There is some “mating” and natgeo type sexual content that might raise some questions in little ones.

There were instances of graphic animal pooping, eating animal parts raw, drinking pee and showing an animal throwing up. My daughter is VERY easily grossed out and she walked out of the room at a few scenes.

The message of the movie really redeems the rest of it. “Never judge any creature by the way they look.” It’s something we learn and are reminded of at every stage of life. It’s something we need to hear as adults and constantly reteach to our children. I don’t want to give away any endings – but I think you’ll be really happy with how Back to the Outback ends!

Back to the Outback | Netflix | Official Trailer

Just a reminder, Back to the Outback will drop globally on Netflix this December 10th!

Previous Post: « Important Relationship Advice That You Need To Hear
Next Post: The New West Side Story Is Bringing Back the Big-Screen Musical »

#Shorts Minimalist Tip: Have a space just for you!
YouTube Video UCnkqXRJxp6NmAfHh8P9D7rw_-py19ZgLnsY