Madrid, one of the liveliest cities in Europe, is the capital of Spain and it is the largest city in the country and the second in the European Union. It offers all kinds of cultural and sports activities and great nightlife, ensuring fun for everyone who visits. It is a city with a happy environment and awake at all hours. It also has very rich gastronomy with a wide range of restaurants, cafes, and summer terraces all around the city. 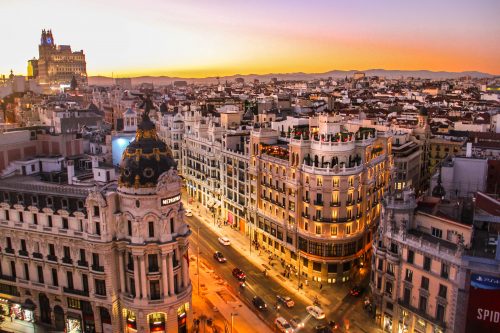 It is also famously known for its well-known museums, its lively avenues with all kinds of shops, and its incomparable nightlife. In addition, Madrid surprises with quiet historical corners full of charm to stroll through, with centuries-old traditional taverns.
Madrid is undoubtedly one of the most interesting cities in Europe. It is hospitable and diverse, and it has an authenticity that is difficult to match.

The city of Madrid in recent years is becoming a very attractive tourist destination for both Spanish and international tourists. In fact, many students from countries all around the world pick this city to learn Spanish because taking Spanish courses in Madrid allows them to experience the great cultural, leisure, and gastronomic atmosphere of this very welcoming city.

So, if you are thinking of visiting this amazing capital, keep reading this article, and you will find out the top activities you must do in Madrid.

A huge square full of people at any time will give you a warm welcome and if you are taking Spanish courses in Madrid, then here you will find an excellent opportunity to practice the language. Puerta del Sol is famous for housing the clock that sounds the 12 chimes with which the Spaniards eat 12 grapes to say goodbye every year, as tradition says.

In addition, there are several statues worthy of consideration. The main one, being the symbol of Madrid, is the Bear and the Strawberry Tree, but you can also see the equestrian statue of Carlos III, which aims to honor him since he was considered the “best mayor of Madrid.” Another important statue is the Mariblanca, a copy of the Venus of the fountain that was in this place before the transformation of the square in the 19th century. Right in front, you will find the plaque that marks the kilometer zero of the country’s highway right in front.

Just a few steps from Puerta del Sol is Plaza Mayor. This square suffered three fires throughout its history. However, it continues to exist since the times when it was outside the medieval town and was used as a market, as a bullring, or where public acts and executions were held.

The Royal Palace of Madrid was completed in 1755. It is considered by its dimensions, 135,000 square meters, the largest palace in Western Europe. Inside, you can see the Throne Room, in which the frescoes in its vaults stand out, the Royal Armory with one of the most important collections of its kind, and the relaxing palace gardens, like “Campo del Moro” or “Jardines de Sabatini”. If you are lucky enough to be on the first Wednesday of the month, you can also see the Changing of the Guard that takes place at 12 noon.

The Prado Museum is one of the most important in the world for the pictorial collections it keeps and ranks eleventh among the most visited museums. It is not a very big museum, that is why, due to lack of space, it was decided to exhibit only the best paintings, making it considered the museum with the most masterpieces per square meter. Right next to it, you will find the oxygenated Botanical Garden.

Contemporary art lovers will significantly enjoy the Reina Sofía Museum, with a vast collection of paintings by Picasso, Miró, and Dalí. The Thyssen Museum also has a splendid display with works from all schools, among which the largest exhibition of flamenco art that exists in Spain would stand out. 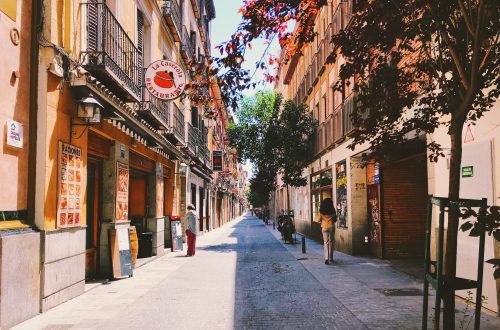 Near the impressive Plaza de España, is the Temple of Debod. This is a temple given by Ancient Egypt as a thank you for the help provided to save temples like Abu Simbel from disappearing due to the construction of the Aswan Dam.

The Santiago Bernabéu stadium is one of the most visited places in the city. Many people worldwide travel to Madrid only to see the famous stadium where the Real Madrid football club trains. Even people who travel from abroad to learn Spanish in Madrid choose this city because of this reason. When visiting the stadium, you can also visit its museum and the cups obtained by the team.

On Sunday mornings, the streets of the historic center of Madrid become a fun street market: “El Rastro.” Here you will find many objects to buy, and you can try one of the typical dishes of Madrid, snails. This market is full of tremendously hospitable people willing to create a fun and relaxed atmosphere. This market is an excellent opportunity for foreigners taking Spanish courses in Madrid to communicate in their native language.

Puerta de Alcalá is the most famous of the old gates that gave access to the town. These gates are still preserved, located in various areas of the city. Along with Puerta de Alcalá, you can see Puerta de Toledo or Puerta de Hierro. This was the first triumphal arch built after the fall of the Roman Empire, which is why it is considered the precursor of others such as the Arc de Triomphe in Paris or the Brandenburg Gate in Berlin.
Behind the door, you will find the Retiro Park, which will guarantee you a pleasant walk near the peaceful Crystal Palace, and where you can see one of the few statues that exist in the world of the Fallen Angel, or an interesting exhibition in the Casa de Terneras and where you may enjoy many other amazing activities.

Previous Post: « Moms: 4 Tips for Taking Care of Your Family This Fall
Next Post: 3 Reasons to Spend More Time Outside »