I first learned about this movie in a top secret meeting at the 2018 Disney Social Media Mom’s Celebration. I was graciously invited and had the pleasure of speaking with Kristen Durr. She is the co-producer of the film along with Brigham Taylor. Kristen Durr gifted us with a preview, we saw a few minutes of the movie Christopher Robin. I cried. It takes a bit to bring me to tears, but I’m a sucker for the “we all have to grow up” dilemma. (Maybe because I’m a mom now!) The movie opens on a scene in the 100 acres wood. A young Christopher Robin is saying his goodbyes to his beloved Pooh because Christopher is being sent away to boarding school. Through sincere tearful goodbyes Christopher promises Pooh that he will never forget him and his 100 acres wood friends. Then we cut to London in the 1950s post WW2. Christopher Robin is all grown up (played by the talented Ewan McGregor). Christopher is now wrapped up in a stressful career in a filing company. He continually choses work over his family and sternness over whimsy. His life is collapsing around him because he has lost sight of what is important. He has forgotten the wisdom the 100 acre woods had given him. He broke his promise. He forgot Pooh. (Do you feel your tender heartstring pulled yet? Oh, it gets even better!) As Christopher Robins life is unraveling, he retreats to a park bench. He rests his face into his hand and whispers desperately, “What to do, What to do, What to do!”. The film music pauses and you hear a familiar voice  (Jim Cummings – the original voice of Pooh.) respond, “What to do indeed!” Pooh is back! He is just as cuddly and lovable as we remember.  The movie is life action. Disney somehow still captured the quinticential furriness and cuteness of all the 100 acre woods characters. The whole gang comes back.

Pooh, Piglet, Eeyore and Tigger, step out of the forest and venture into London to return Christopher’s lost briefcase…because best friends will always be there for you. Aside from saving Christopher Robins job, they help him in the most valuable way. Pooh and the gang help Christopher Robin remember the loving and playful boy who is still inside. (literal tears you guys!). I’ll leave you with a few Pooh words of wisdom “Doing nothing often leads to the very best something.” 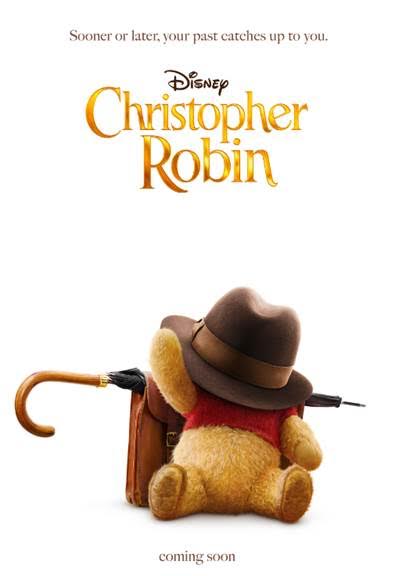 FYI: There will be 3 new original songs for the movie “Christopher Robin” including the old classic Pooh songs you and I love to hum.

To borrow from the Great Movie Ride, “I’ll see you – at the movies!”
xo