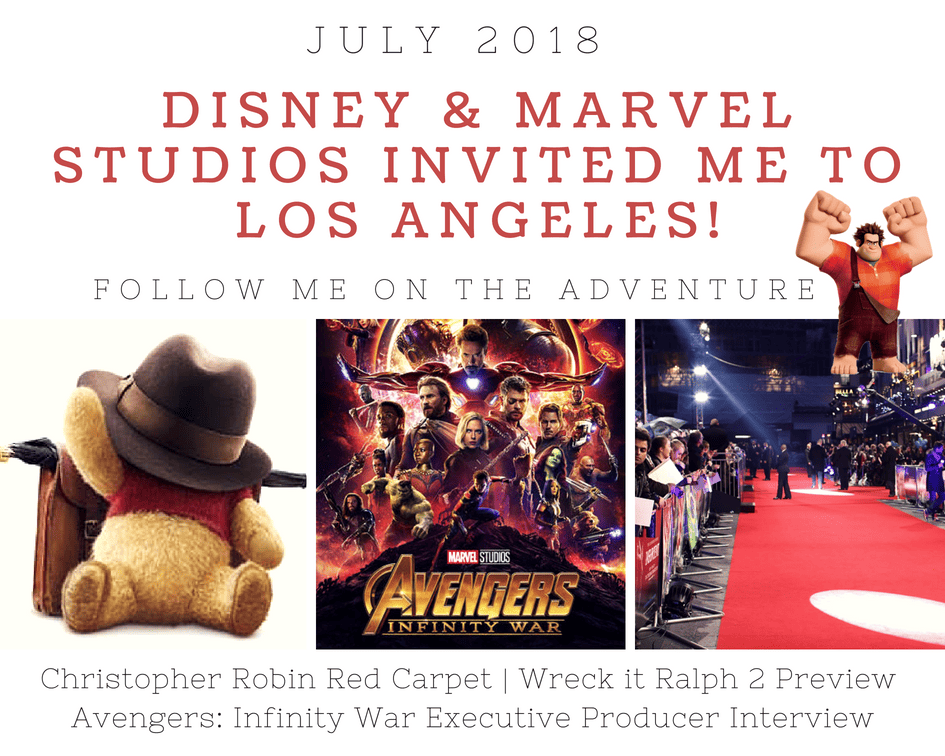 This summer MegForIt.com was invited by Disney & Marvel studios (along with many other Disney Bloggers) for an incredible Los Angeles media adventure! I will be flying from the east coast to the west coast to blog about some exciting Hollywood Movie events. I hope you will come along with me! First things first, make sure you are following me on Instagram & Twitter because I will be “live-sharing” every moment I can. Want to know what I’ll be doing? Keep scrolling to read about this dream come true itinerary….

Saturday July 28th I’ll be flying into LAX and spending the day at Disneyland. This is my first time in Disneyland so I could really use some advice on the first timers “must-see” attractions and the best food options! Comment below with all your DisneyLand/California Adventure advice, I really appreciate it!

There are some celebrity related events planned on this trip. The press trip revolves around 3 major movies, Christopher Robin, Avengers: Infinity War and Ralph Breaks the Internet. I’ll break down all the Hollywood details for you.

I first learned about this movie in a top secret session at the February 2018 Disney Social Media Mom’s Celebration. The producer of the film explained that this live action family movie features Christopher Robin all grown up. The movie premise is:  a grown up Christopher Robins life is unraveling. He retreats to a park bench after work. He rests his face into his hand and whispers desperately, “What to do, What to do, What to do!”. The film music pauses and you hear a familiar voice  (Jim Cummings – the original voice of Pooh.) respond, “What to do indeed!” Pooh is back! He is just as cuddly and lovable as we remember.  The movie is life action. Disney somehow still captured the quinticential furriness and cuteness of all the 100 acre woods characters. The whole gang comes back.  Pooh, Piglet, Eeyore and Tigger, step out of the forest and venture into London to return Christopher’s lost briefcase…because best friends will always be there for you. Aside from saving Christopher Robin’s job, they help him in the most valuable way. Pooh and the gang help Christopher Robin remember the loving and playful boy who is still inside. (literal tears you guys!). To read my full movie preview post CLICK HERE. 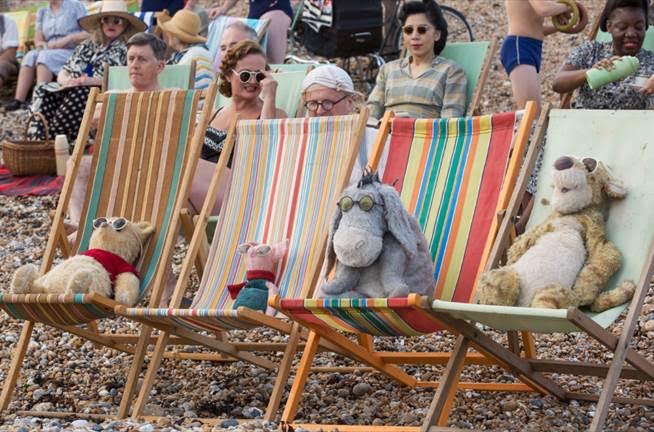 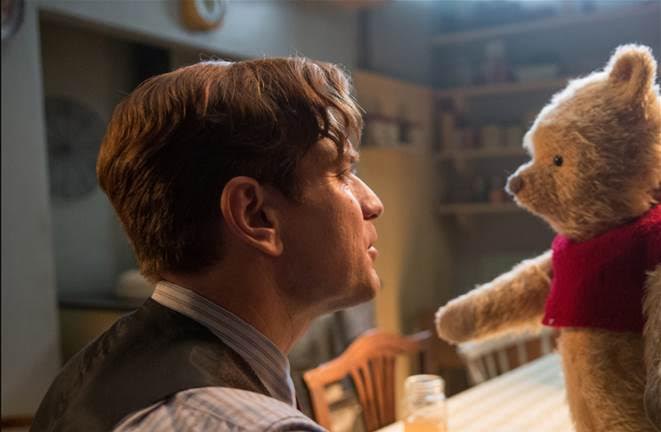 Doesn’t Ewan McGregor look dashing in the 1940s? I will be interviewing Ewan McGregor (*fans self frantically*) as well as other actors, the director and the beloved Jim Cummings (the forever voice of Winnie the Pooh & Tigger). Yes, you read that correctly. Interviewing, like face to face, I’m still pinching myself. I have a ton of questions for these guys, but if you could ask Ewan McGregor, Haylet Atwell, Bronte Carmichael, Jim Cummings or director Marc Foster anything – What would it be? Comment below!

Enjoyed that sneak peak? Did you get goosebumps? Me too! I am super pumped to see the movie and interview the cast! I’m also excited to walk the red carpet premiere of Christopher Robin! I get to put on a fancy dress and go to the movies with everyone in the movie! What a surreal night that will be! Be sure to follow me on Twitter to see all the behind the scenes fun with me and the other bloggers!

Do you ever wish that you could get all your friends, from all your circles, into one room? That’s kind of the concept of the new movie Avengers: Infinity War. It came out April 27th 2018.  Marvel Studios and Walt Disney Studios Motion Pictures got all your favorite Marvel characters from all your favorite Marvel movies and put them together for a mission in Avengers: Infinity War. This movie will have something for everyone because it literally includes ALL the best marvel heroes. If you haven’t seen this movie, what have you been doing? Just kidding, but for real, you gotta see this movie. Good news, it’s coming out soon on Blu-Ray with some amazing bonus features. 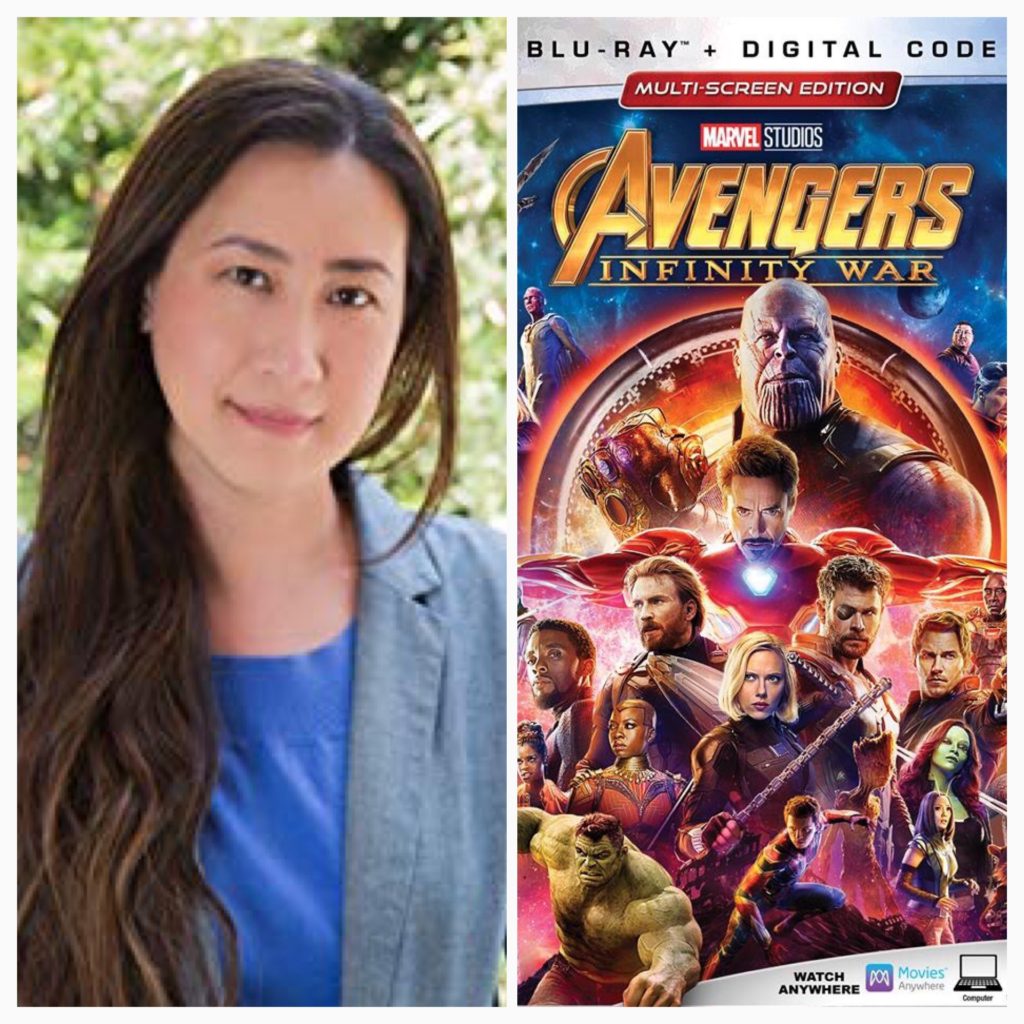 On this press trip I will be interviewing and discussing the movie with Executive Producer Trinh Tran! (That’s her on the left!) The coolest part of the Blu-ray coming out is that you can “take home” a piece of cinematic history. This film was one of the biggest movies of all time! Ask any super hero nerd, we have been waiting for this movie for 10 years! Marvel honored their promise to fans and now when you buy the Blu-ray, you gain exclusive access to more than two hours of never-before-revealed super hero details, deleted scenes and more! Avenger Infinity war will arrive digitally July 31st and on Blu-ray August 14th.  Click HERE to read my comprehensive preview post for this movie.

If you thought Avengers: Infinity War was the most epic crossover in movie history…..think again! In Wreck it Ralph 2, the video game “bad guy”, Ralph and fellow misfit Vanellope have to risk everything by traveling the world wide web in search of a part to a save a video game. It’s completely topical and completely hilarious. My favorite scene in the trailer is this one: 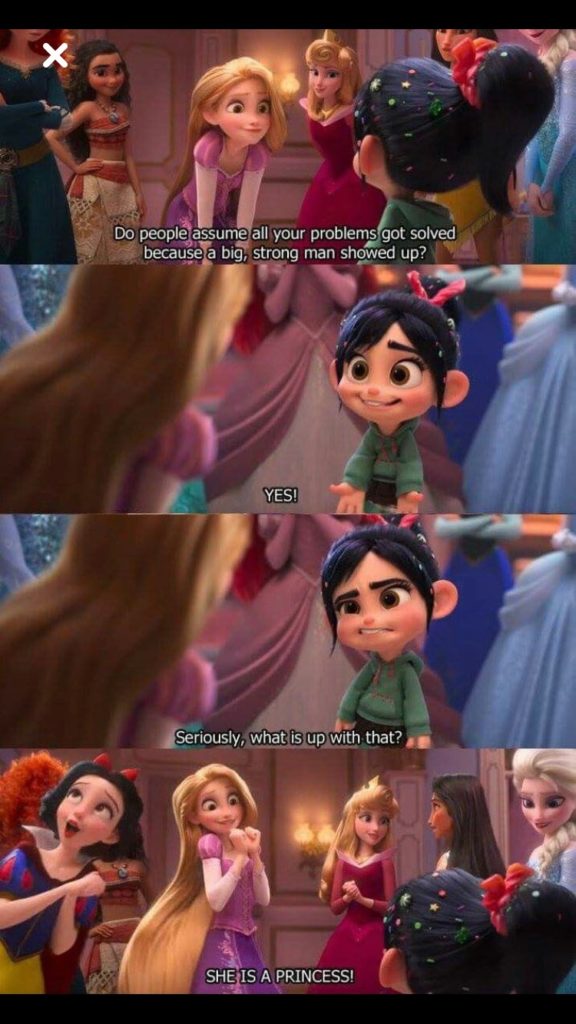 Please tell me you laughed at that! This princess merger sequence is the EPIC crossover that we have all been waiting for! I am looking forward to taking my 5 year old, this coming November 21st. I love a good sequel!

Tuesday July 31st, the bloggers and I will be at the Walt Disney Studios lot to preview “Ralph Breaks the Internet”. We will have an intro Question & Answer session with the Director Rich Moore and writer Phil Johnston. Click below to watch the trailer.

What a legendary way to end my summer 2018! I am full of gratefulness for this invitation. I will do my best to deliver the best content possible to you all. Let me know WHAT you are particularly interested in reading about and seeing live. I promise to be live tweeting and posting Insta-stories throughout the whole trip. Won’t you join me?

Previous Post: « A Day in the Life of a Concierge Nurse | The Medical Concierge®
Next Post: Creating The Perfect Bathroom: How You Can Do It »