This November I was graciously invited to the Geekly Retreat which is a 4 day “invite-only” retreat for entertainment bloggers. Part of the itinerary was to attend the Frozen 2 World Premiere, walk the red carpet and close the night with the VIP after-party!

This is kind-of a huge deal for my blogging career! 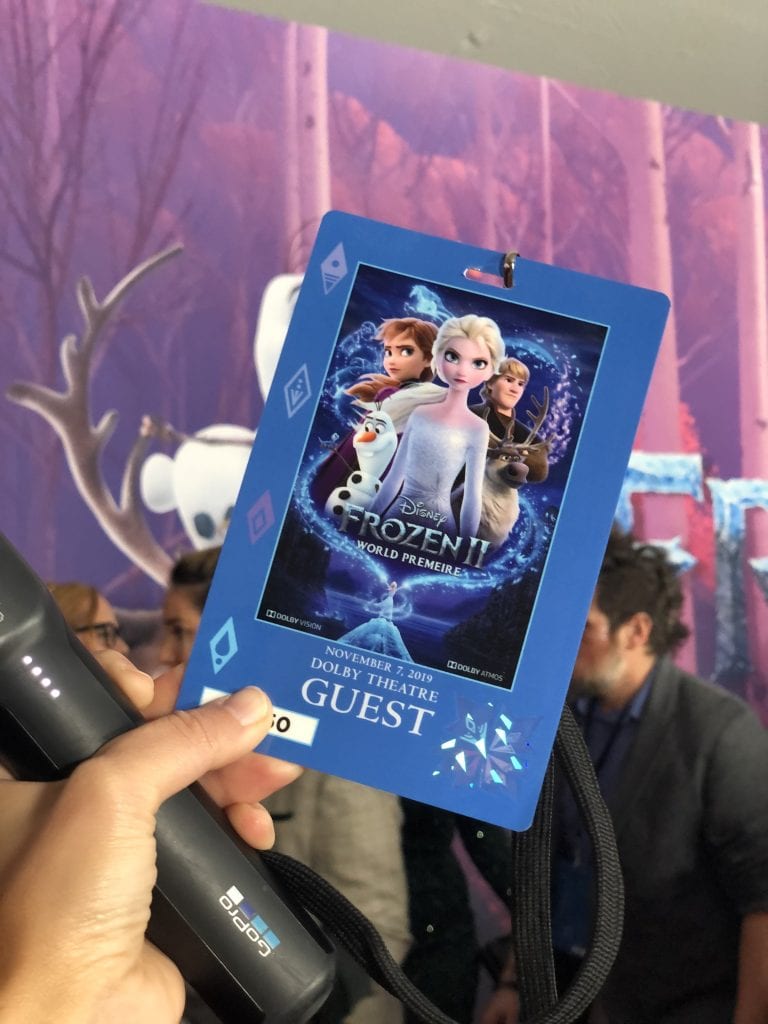 After years of blogging my booty off, I feel like I can finally start to feel the perks of my hard work. I am so thankful for these exciting opportunities!

Bright lights, cameras flashing, epic new plot, meeting some epically creative souls. This was one for the books (or blog). Sometimes you experience something so big that it changes you. I’m never going back, the past is in the paaaaaaaaaast. Btw, my entire red carpet look for this evening was less than $100. Dm me for links to shop my dress, heels, purse and earrings! I love @amazon prime. #Frozen2Premiere!!!!!! #TheGeeklyRetreat #Frozen2

This red carpet was “Fall Foliage” themed which plays tribute to the setting of the movie Frozen 2. The red carpet was blanketed with fall leaves, lined with trees that were lush with autumn colored leaves, and a mysterious mist around us! 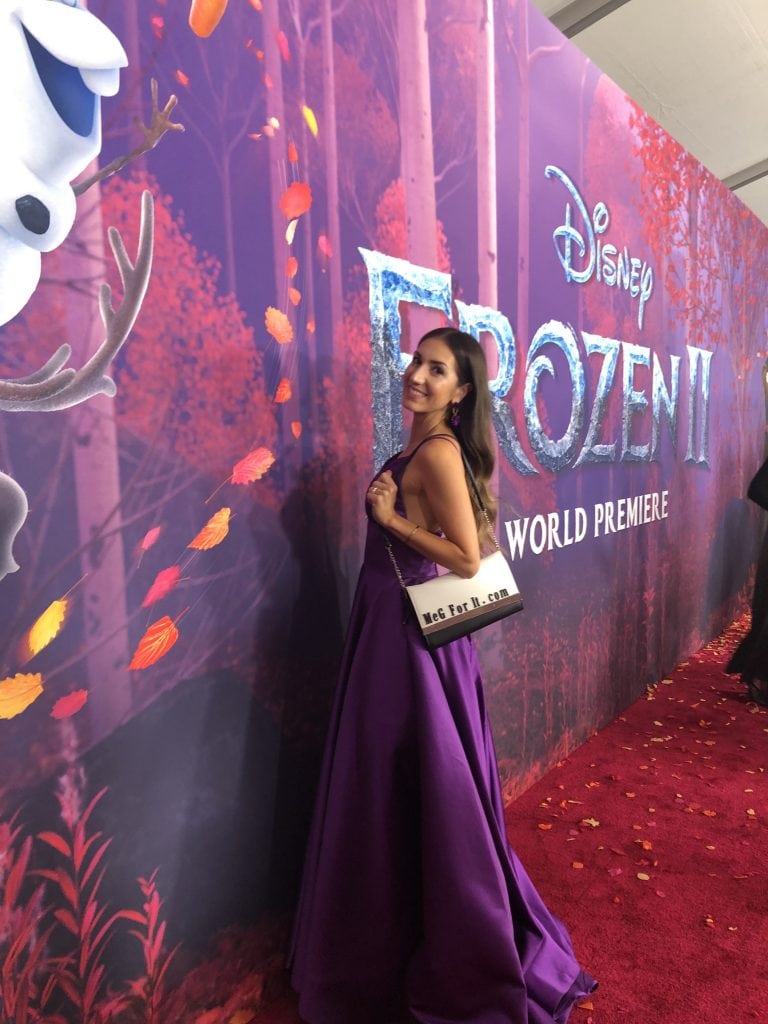 The energy of a red carpet is sensational. You can feel the anticipation of seeing a film before anyone else in the world! You can also feel the nervous jitters of the cast and the “excitement” of the other celebrities being filmed and photographed.

To be honest, it’s loud, the lights are bright, the paparazzi are yelling – it sounds overwhelming but it’s totally fabulous! I can’t get enough of it! 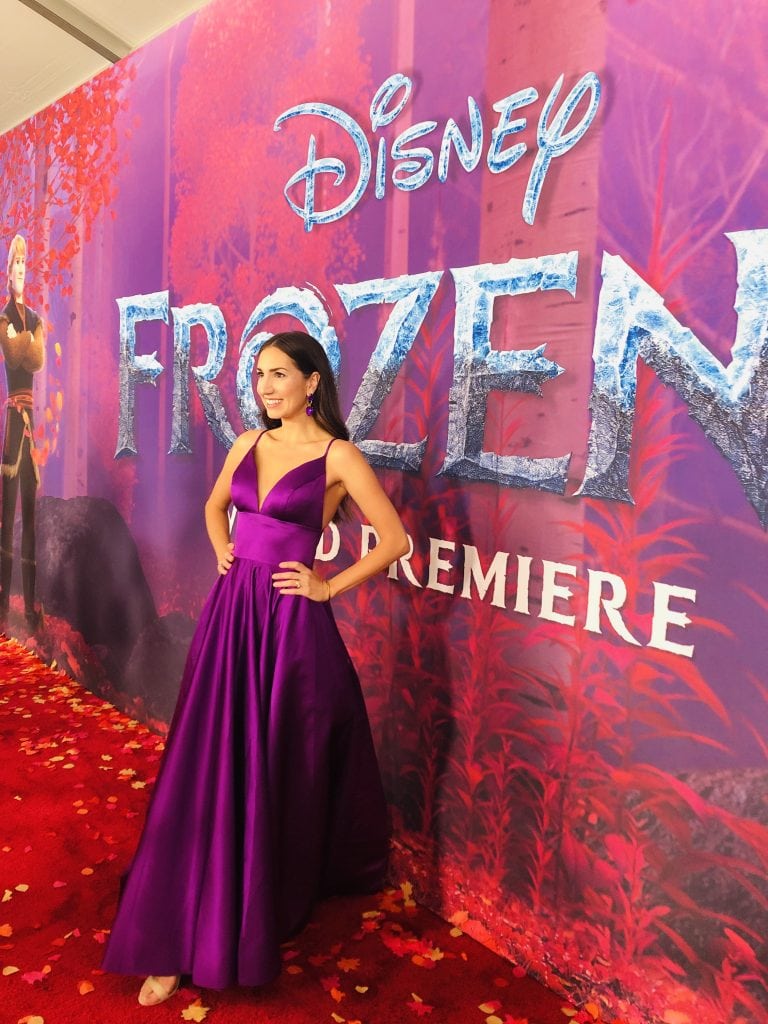 I have only walked 2 other red carpets. My first red carpet was for the Disney film, “Christopher Robin” in 2018. Walt Disney Studios invited me to preview the movie, write a review and then attend the premiere! 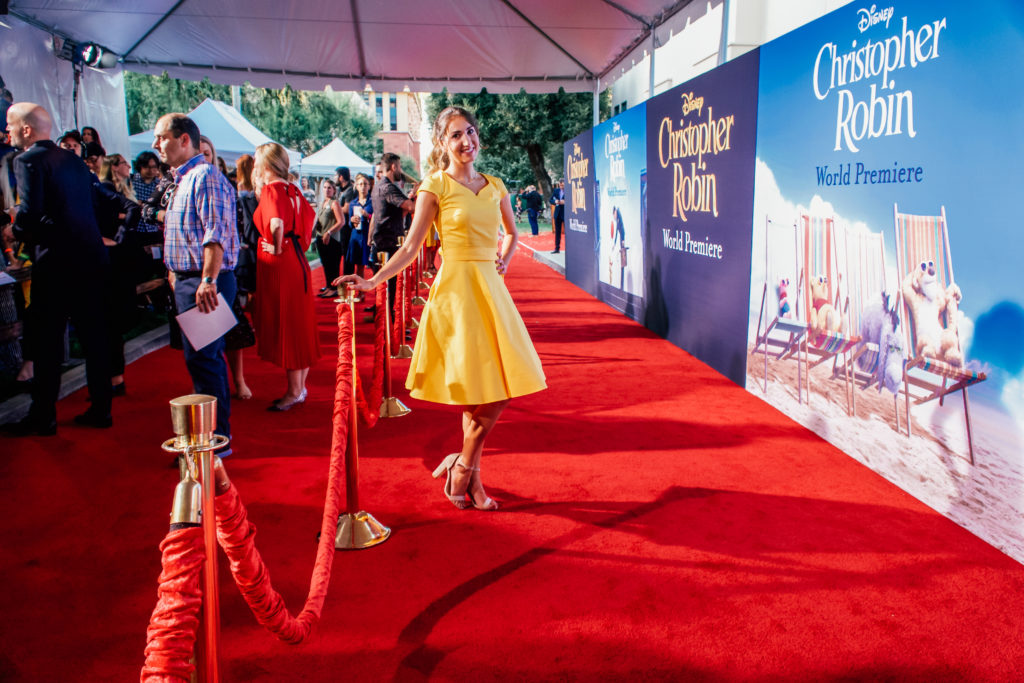 The second red carpet I ever attended was the 2019 Emmy Awards. This was a totally crazy thing that happened in the most insane way. To read how I got invited to the Emmys: Click Here.

Frozen 2 Premiere in the Dolby Theater

The movie premiere itself was held in the Dolby Thearers which is the same theater they host the Oscars in! I sat in the 2nd row on the right side. Before we were seated, they offered us buckets of popcorn and coke products. After everyone was seated, they introduced the cast and film makers. 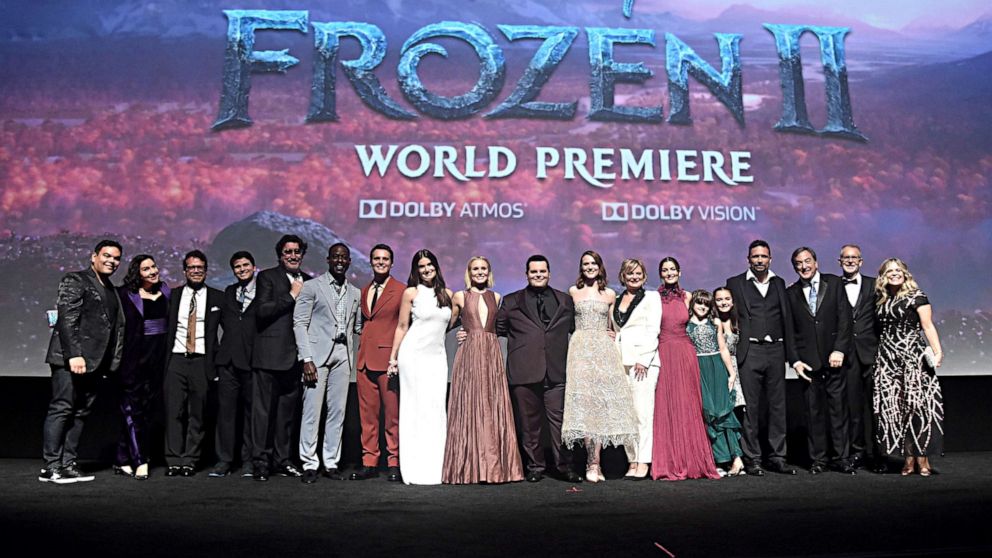 Lights dimmed, the theater was pitch black and then….

We begin the origin story of Elsa. Why does she have powers? Why does she feel a calling into the “unknown”. Elsa, Anna, Kristoff and Olaf must band together on a journey to save Arendelle!

I wish I could just type out all the amazing plot twists, funny moments, easter eggs and everything about Frozen 2. But I can’t! Frozen 2 is not coming to a theater near you until November 22nd. So in order not to spoil it for everyone, I’ll wait to reveal my full review.

For now, I will tell you this: It’s better than the first movie. That’s it, that’s all I’m going to say!

The Frozen 2 After Party

Up a few flights of stairs, was the after party! They had games, photo ops, ice sculptures, face painting, endless buffets of food, giant dessert tables, a Mcdonalds happy meal & ice cream bar and so much more!

I strolled in just as all the other celebs were coming on. I walked in with Molly Sims and her 3 little girls all dressed as Elsa!

I was walking by all the celebrities and fancy people like a fish outa water! It was surreal to be there. I grabbed a few selfies with some of the celebrities. Here they are, keep scrolling!

Celebrity Interactions at the Frozen 2 Premiere

Yvette Nicole Brown is so sweet, she was discussing women in hollywood with a few people at a hightop table before I interrupted her for a picture. 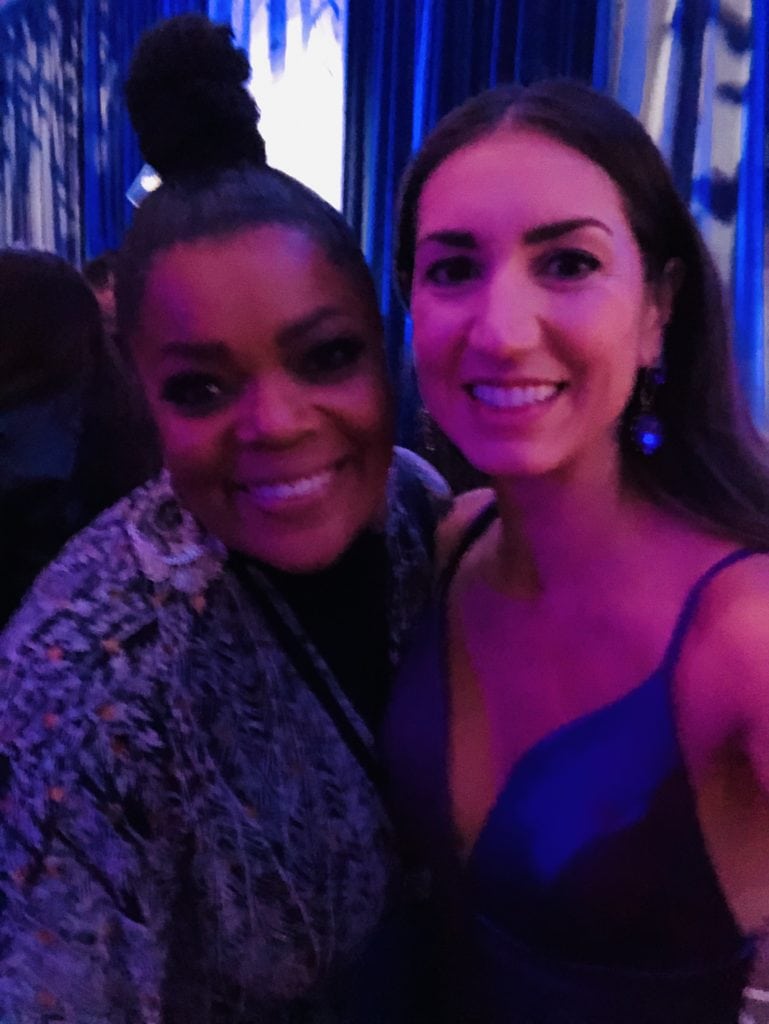 Patton Oswalt was scrolling twitter while his daughter got a lesson on how to draw Olaf – when I walked up. He was SO enthusiastic and sweet. He offered to take a pic before I got a chance to ask! Patton is super polite and kind! 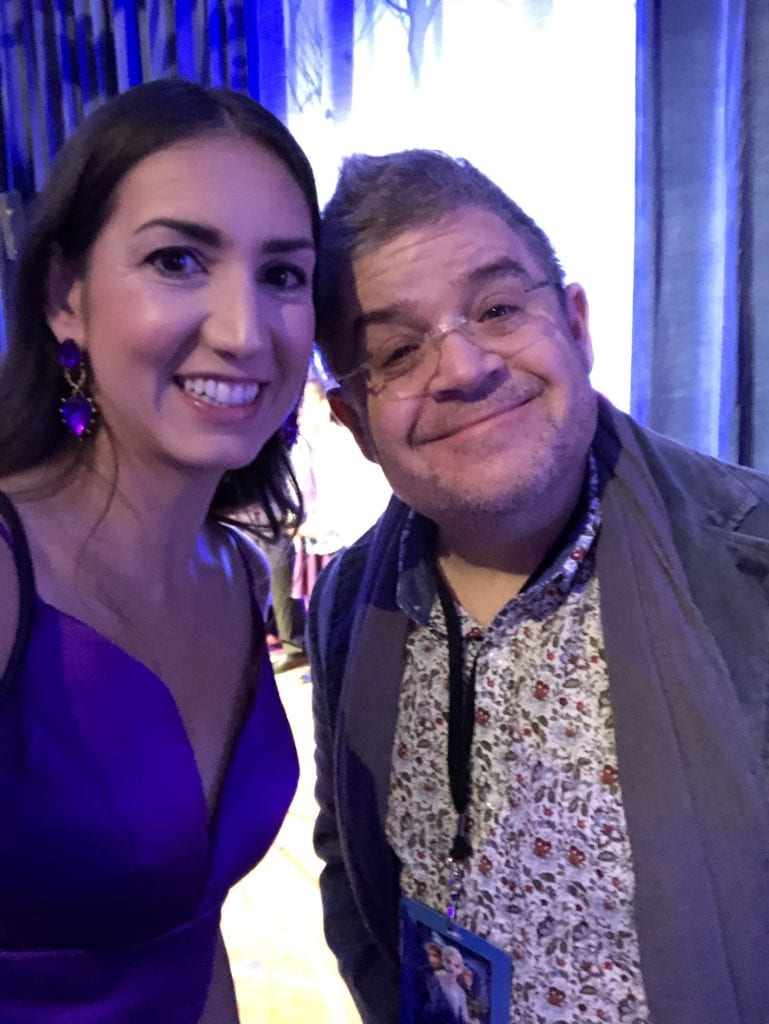 Jeremy Sisto has some major masculine vibes when I was standing there talking to him. He’s so tall and his personality feels even taller. I’m not sure how – but his voice is deeper and more piercing in person. He was walking up to the bar when I asked for a selfie and we struck up a conversation about my gimbal I had for my gopro. He said he just bought one and I gave him a tip about saving the battery life. 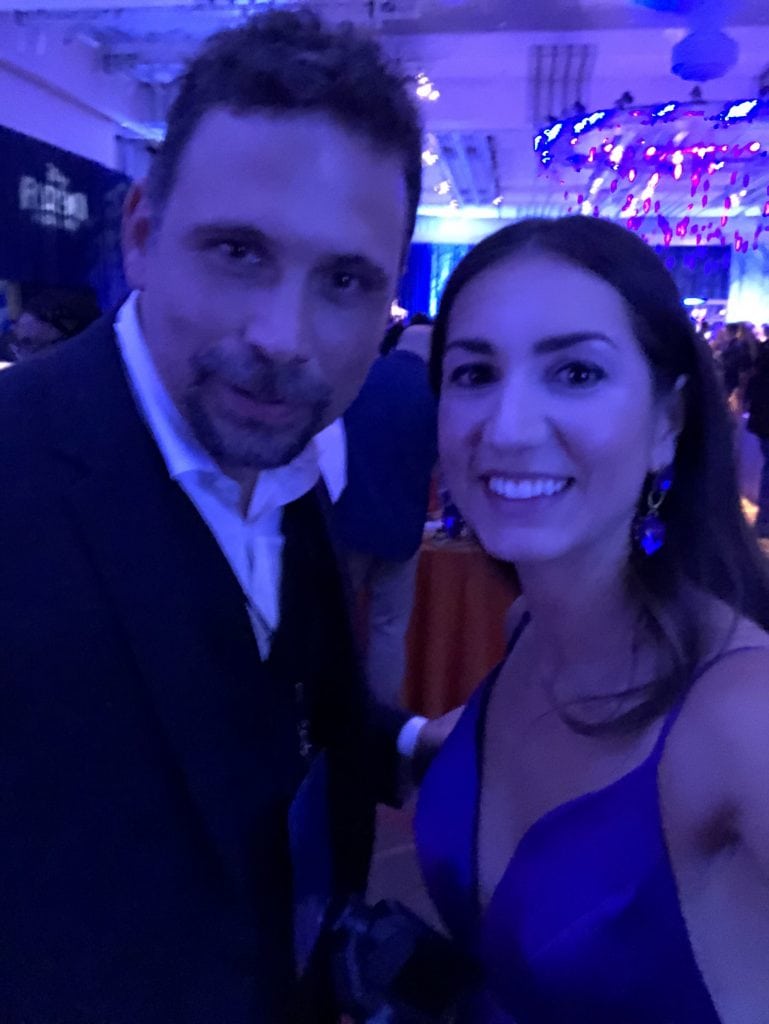 Jason Ritter was in the middle of an enthusiastic conversation about Netflix shows when I tapped his shoulder. He was absolutely adorable. He was happy to take a photo and talk about our favorite Netflix shows. 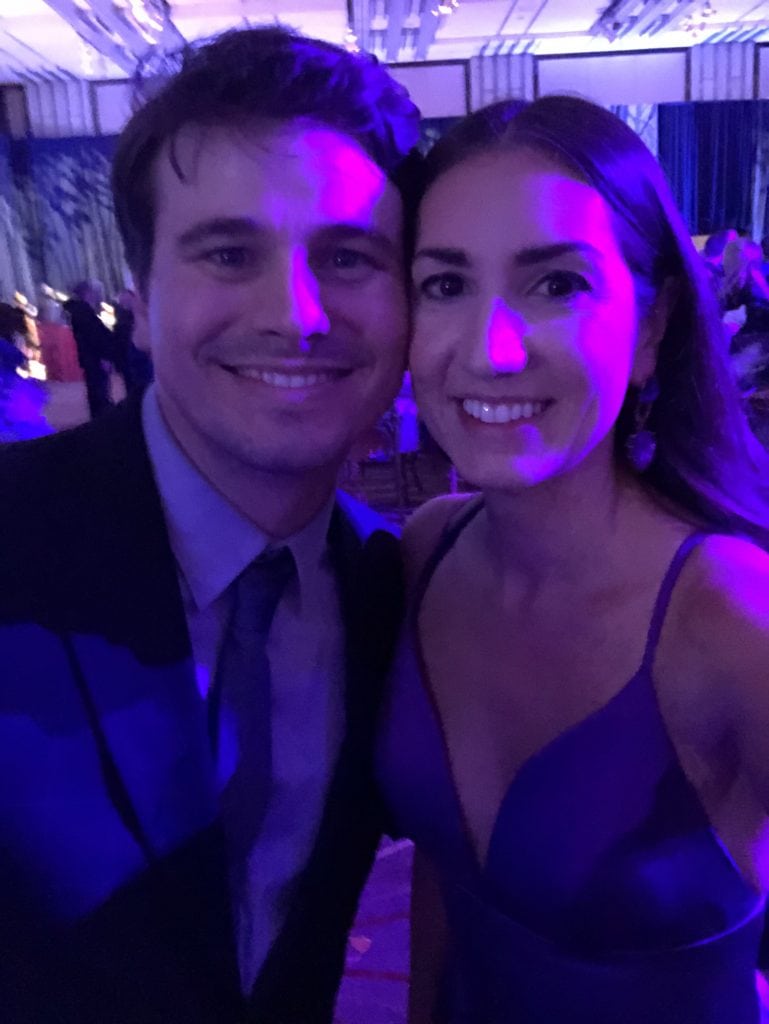 Jonathan Groff was looking so handsome in a 70s vibe orange suit. It’s so strange to hear him talk because he doesn’t change his voice at all for Frozen. He is Kristoff. So talking to him feels strange and wonderful. Every time our paths crossed that night he had a huge smile on his face. 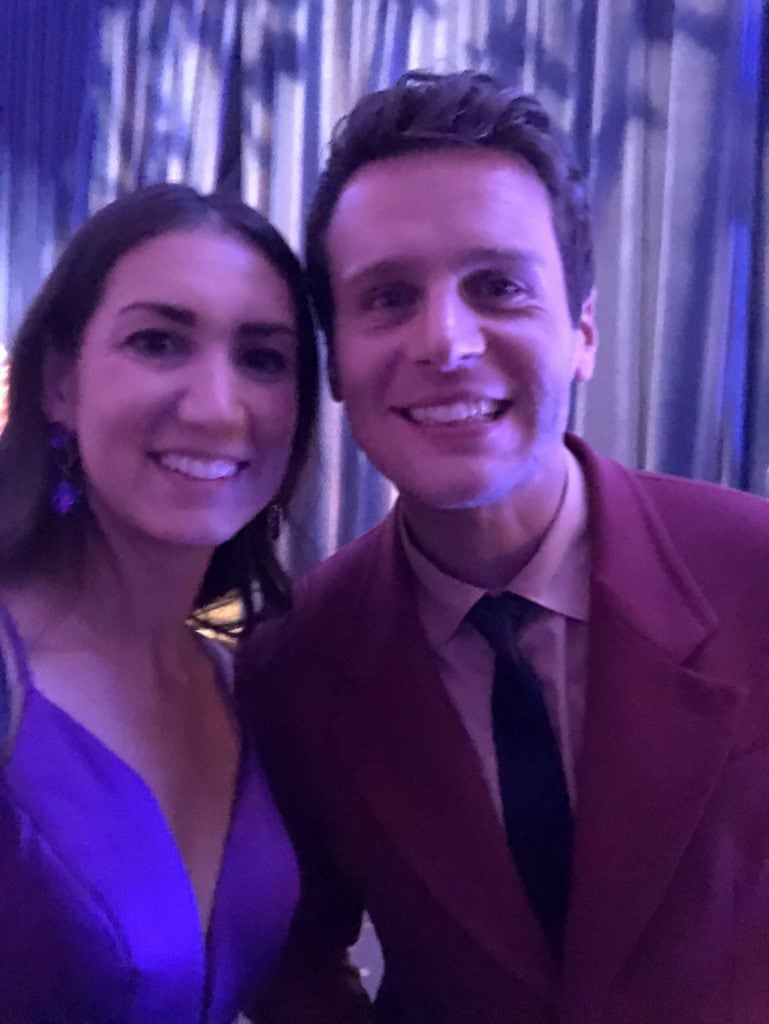 Sterling Brown is just as handsome and tall as you think he is. He was there with his beautiful wife and kids. At one point he had to referee his kids and remind one of them to say “thank you”. It was so refreshing to see that celebrity parenting really doesn’t look that different regular parenting! They’re just like us, right? 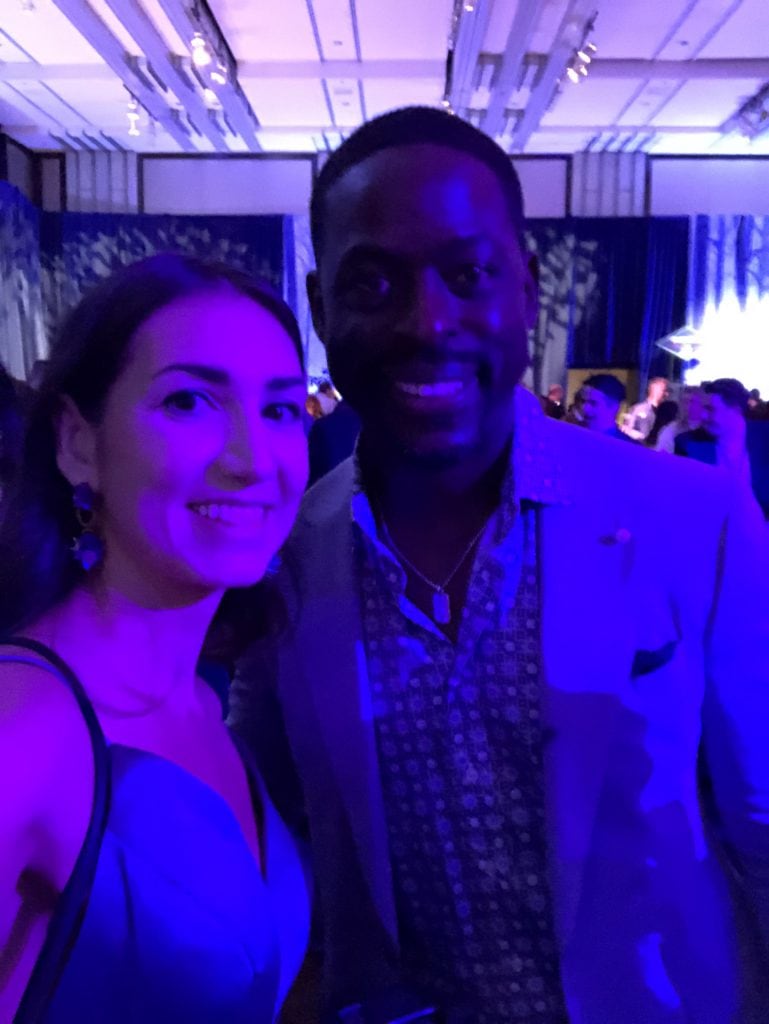 There was a moment after I took a selfie with Garrett and Jessica Gee (from thebucketlistfamily.com ) where I had to step aside and have a little cry. It felt like everything around me faded away for a second and I was left in a deep moment of gratitude. “Glorious” from Macklemore was playing in my head. 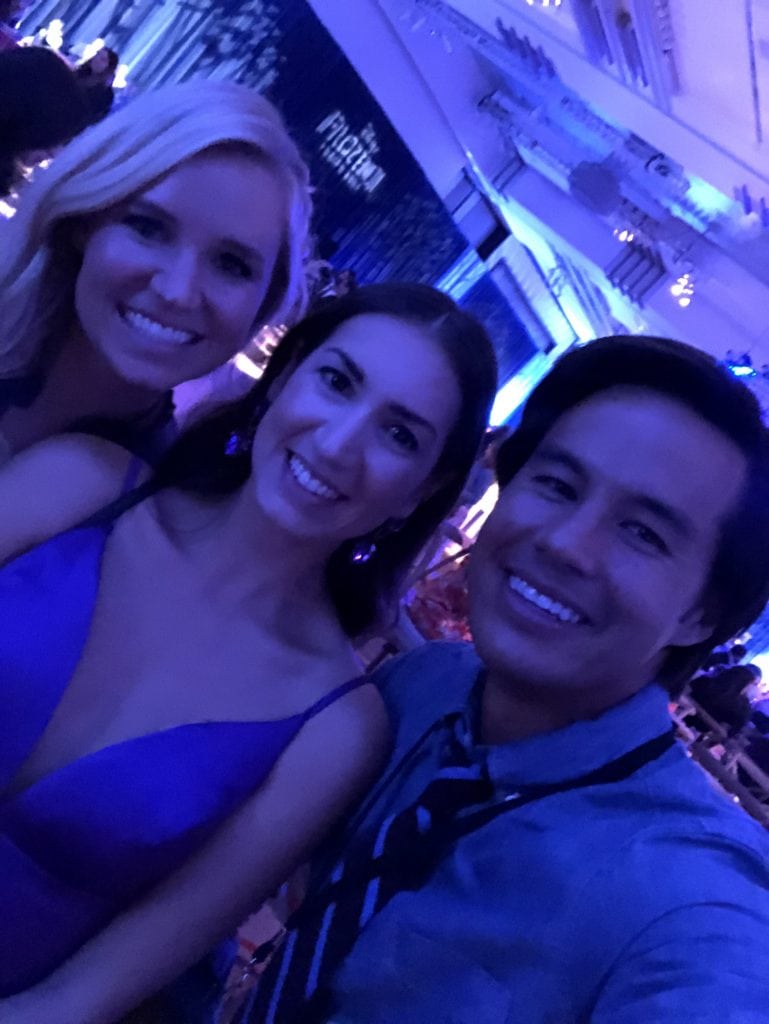 I can’t believe I’m here but I know I was meant to be. And to quote Macklmore: “The world is up for grabs!”

For real though, this red carpet was one of the best experiences in my blogging career. I truly mean that. Don’t be afraid to pursue something you once believed was impossible. Reach for your dreams because something even better than what you imagined can happen!

I want to thank…

Thank you to the Geekly Show Girls and Walt Disney Studios for inviting me and validating my blog. I can’t wait to see what 2020 will bring! But before that, you gotta watch my full VLOG of my Frozen 2 Red Carpet Experience!

CHECK OUT MY FULL MOVIE REVIEW
Frozen 2 is in theaters November 22nd 2019.