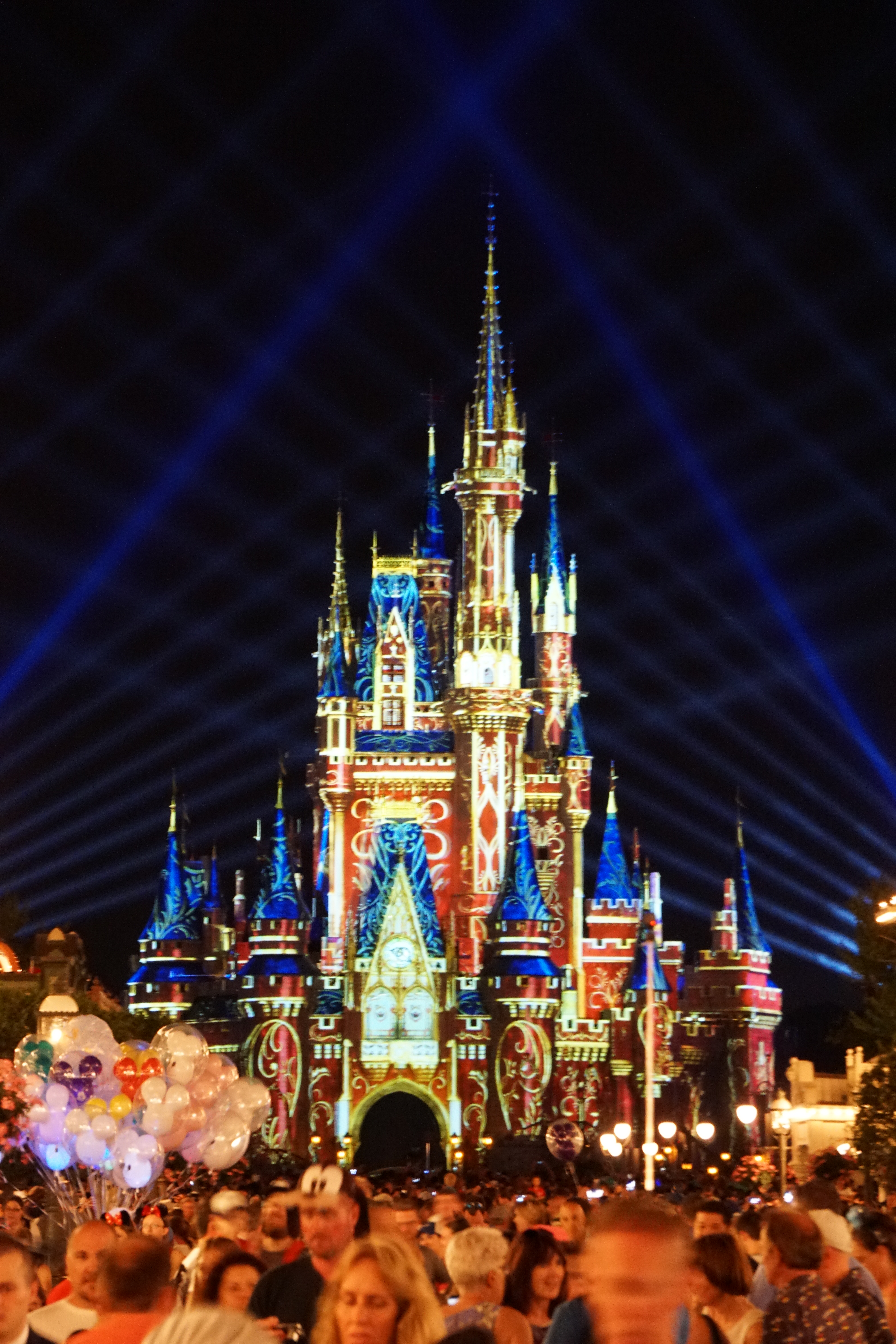 This new fireworks show is the most stunning show Disney has ever put on. “Happily Ever After” does not disappoint as it replaces the previous show, Wishes. After a 14 year run, the inspiring beloved Wishes show seemed impossible to replace. But Disney created did it again with “Happily Ever After”. This 18 minute show takes place at the end of the day at the Magic Kingdom Park. This show is so much more than a few fireworks set to a soundtrack. It is going to be the highlight of your visit to Disney World. Complete with lasers, lights, projections, and the newest state of the art fireworks – I guarantee you haven’t seen anything like this before. Aside from the sheer innovations, it will touch you emotionally and tug at your heart strings 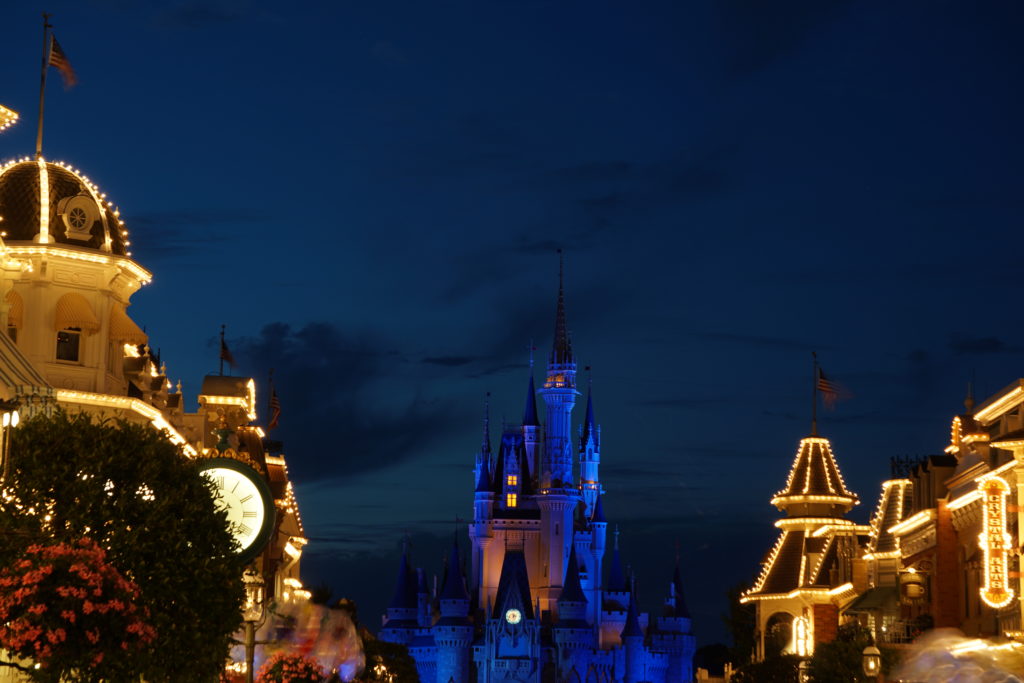 10 minutes before the show, an overhead announcement is made throughout the park to notify guests that show will begin soon. It gives you a little warning so you can find a nice viewing spot. I used to enjoy the Wishes show from behind the castle, but I recommend watching “Happily Ever After” on mainstreet or in Town Square. You want to be in front of the castle because of the unique projection images on the castle. 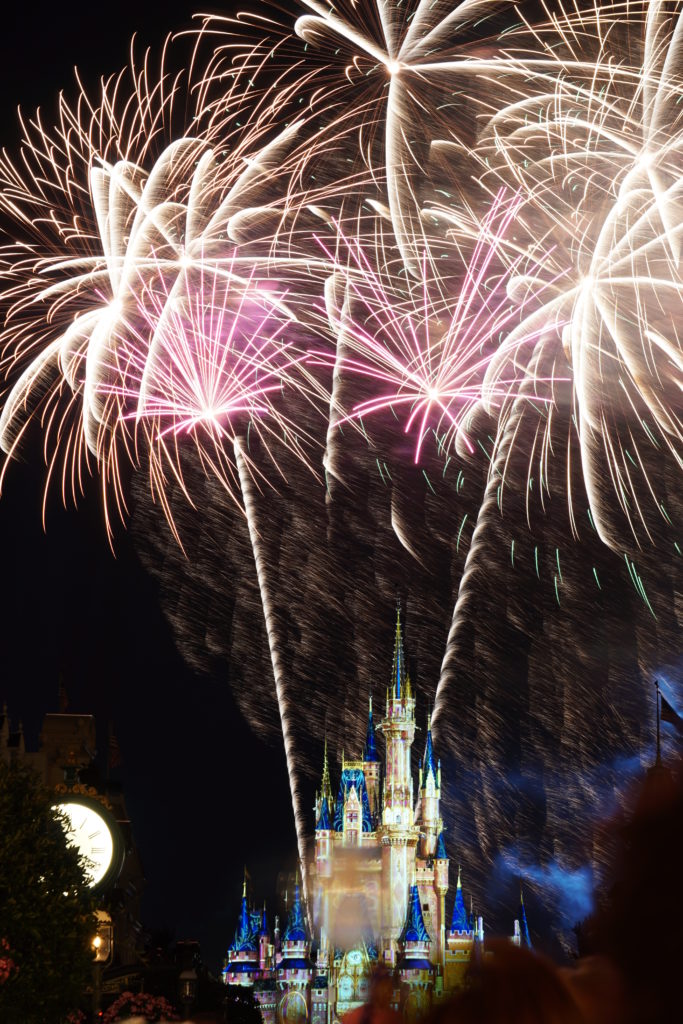 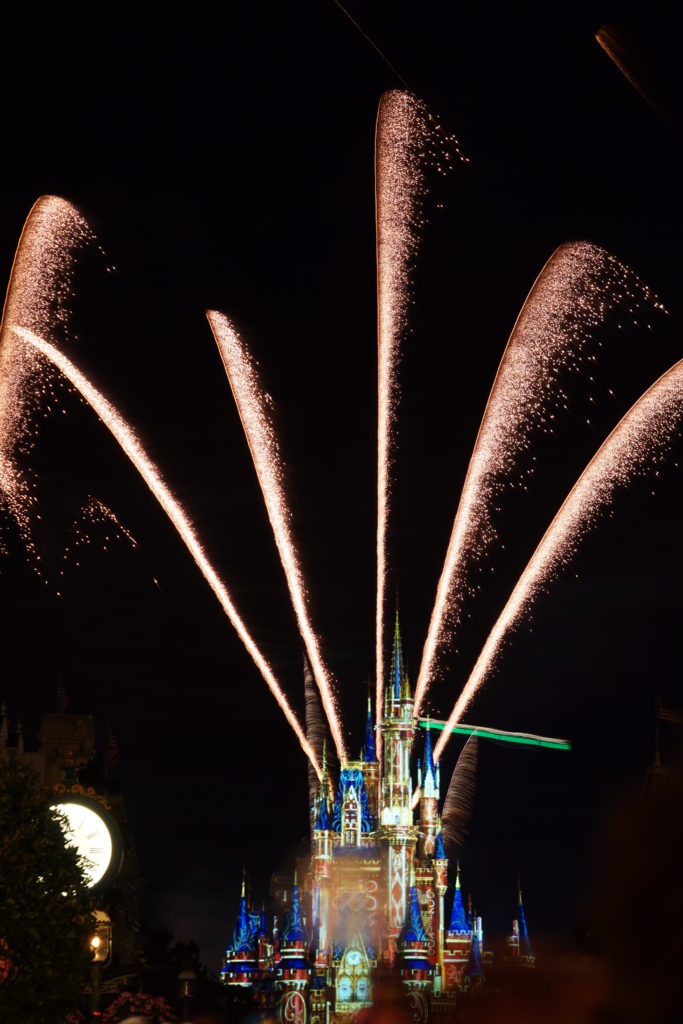 As the show begins, the majority of the lights all suddenly shut off. And side lights point to the tip top of the castle. No matter that your doing or what is happening around you, your attention is fixed onto the castle. The upbeat inspiration music begins and lasers project on either side of the castle, framing it perfectly. The castle begins to sparkle as if its made of diamonds. I’m not sure how they do this, but its spectacular!

Opening Narration, “And they all lived Happily Ever After. Each of us has a dream, a hearts desire, it calls to us. And when we’re brave enough to listen and old enough to pursue, THAT DREAM will lead us on a journey to discover who we’re meant to be. All we have to do is look inside our hearts and unlock the magic within. ”

This opening narration will give you goosebumps as its delivered. It is followed by the Happily Ever After soundtrack that is sung by two amazingly talented artists who were featured in the biggest Broadway show of all time “Hamilton”. (Ever heard of it? Yeah, its a big deal.) As the music plays the castle projections begin. You won’t believe your eyes how REAL and VIVID these images are. The castle transforms into a new royal look that makes the whole crowd gasp. You can’t understand how something is that colorful and realistic. The music builds and builds upon itself until…the beat drops and the fireworks rise! Not one, not two, but 7 different fireworks blast off to begin the show from every direction. They are followed by more lasers. It’s impressive how timely the fireworks blasts are to the musics highs and lows. The fireworks they chose in the sequence could not highlight the castle more. They are perfection. I mean, as they are singing “heart beat” giant heart shaped fireworks exploded, but only for the moment they sing that phrase! There are arrows and bullseyes for the Brave part, swirls for the Moana part, you get the idea! 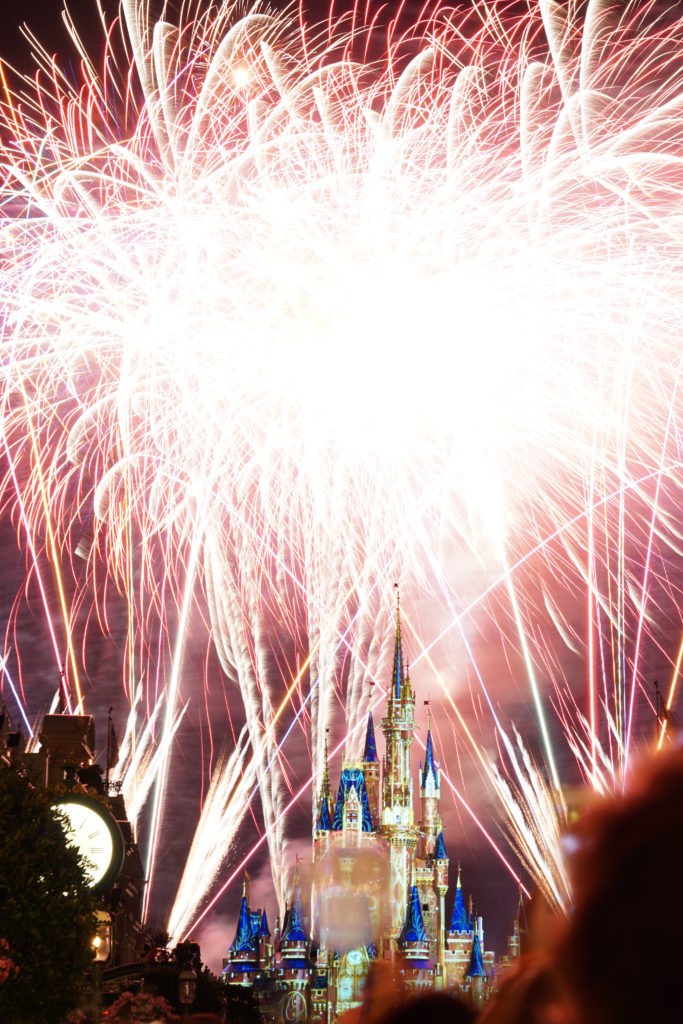 Many of your old favorites and new favorites are featured in this show! Little snippets from The Little Mermaid, Hunchback of Notre Dame, Brave, Moana, UP, Aladdin, Tarzan, The Lion King, Toy Story, The Jungle Book, Monsters Inc, Frozen, Tangled, Pirates of the Caribbean, Hercules, Peter Pan, the list goes on!

One of my favorite parts is when the movie “UP” is represented. The projection on the castle shows the house floating up and away with the hundreds of balloons. It’s simply magical.

Try not to get teary eyed and full of goosebumps when you are singing along with thousands of other guests.

Don’t worry there are plenty of “Ohhh” and “Ahhhh” moments, just like Wishes had! Another similarity to wishes is the Villian sequence. They have a small part of the show that features the villains and that sinister cackle of the evil queen. 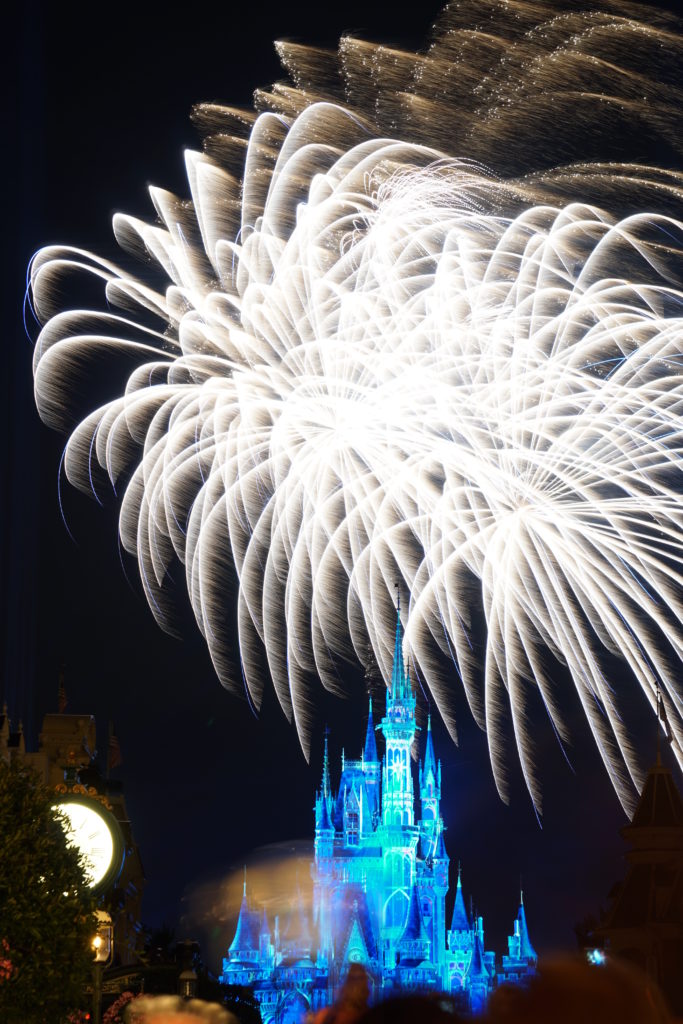 *Huge Bonus* I love that they features the Pirates of the Caribbean theme song. That is one of the best pieces of music ever composed for a disney movie. It’s iconic and so recognizable. I’m so glad they put it in there!

I was thrilled that they did not leave out my FAVORITE Disney movie song, “I can go the distance” from Hercules.

INSIDER MEGFORIT SECRET: I learned from a reliable source/castmember that at the midway point of the show,  there is a tribute to the fallen cast members who were killed in the Orlando Pulse Dance club terrorist attack.  There is a point in the show where a rainbow of round fireworks burst out from the castle. That was one way Disney wanted to remember and honor those who were lost. 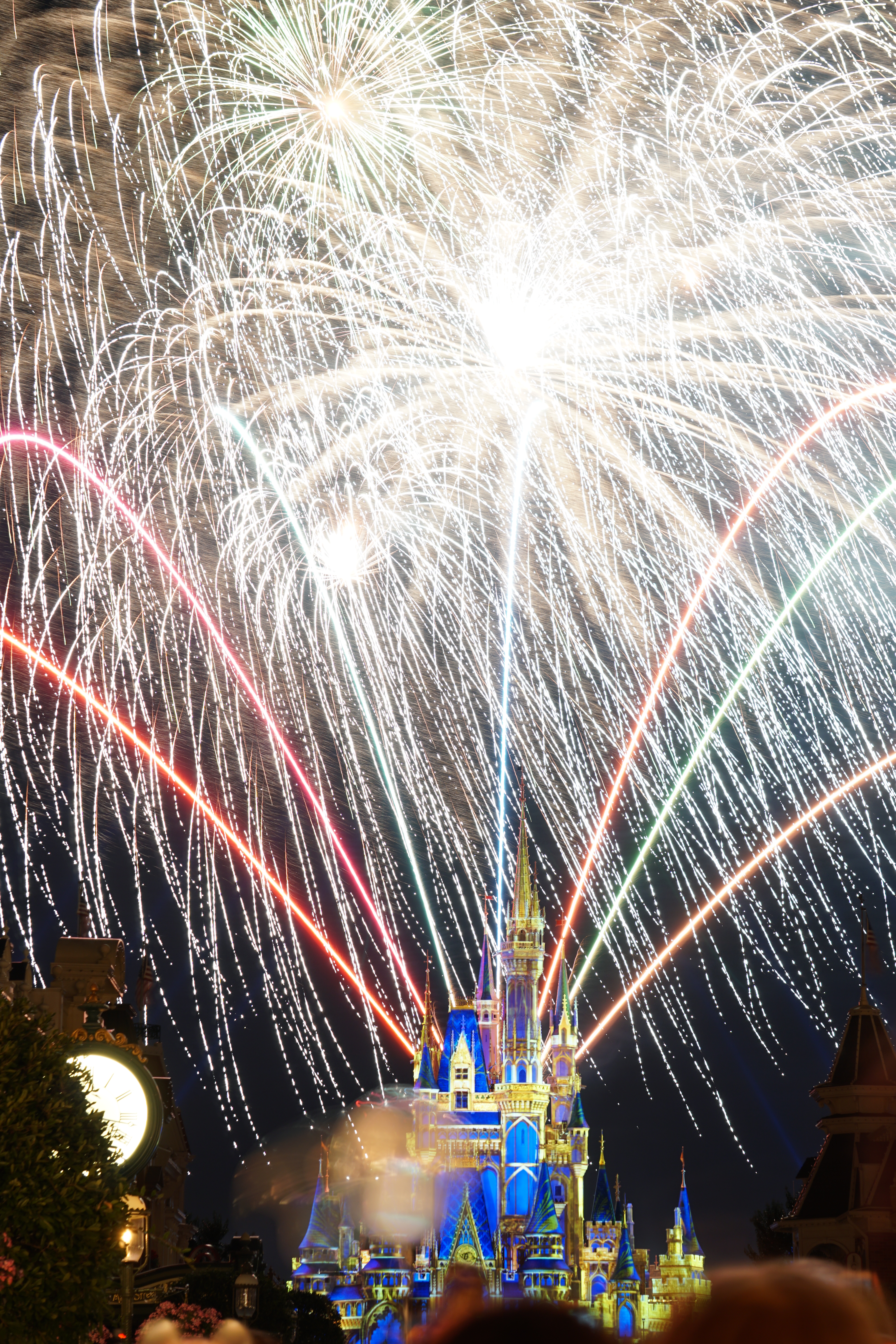 Closing narration “And so our journey comes to an end, but yours continues on. Grab hold of your dreams and MAKE then come true. For you are the key to unlocking your own magic. Now go, let your dreams guide you. Reach out and find your… Happily Ever After.”

Just when you think its over, you see Tinker Bell light up from the top of the castle! She comes flying down just like she has done for 30 years (my whole lifetime). I was so sure they were going to get rid of the Tinker bell flight! But they didn’t! I mean, how could they, it’s classic Disney?

Overall, its 10 times the fireworks and theatrics with just as much magic as Wishes. I urge you all to stay for the “Happily Ever After” show when you visit the Magic Kingdom Park. This is an attraction that stands on its own and completely worth it, so worth it. 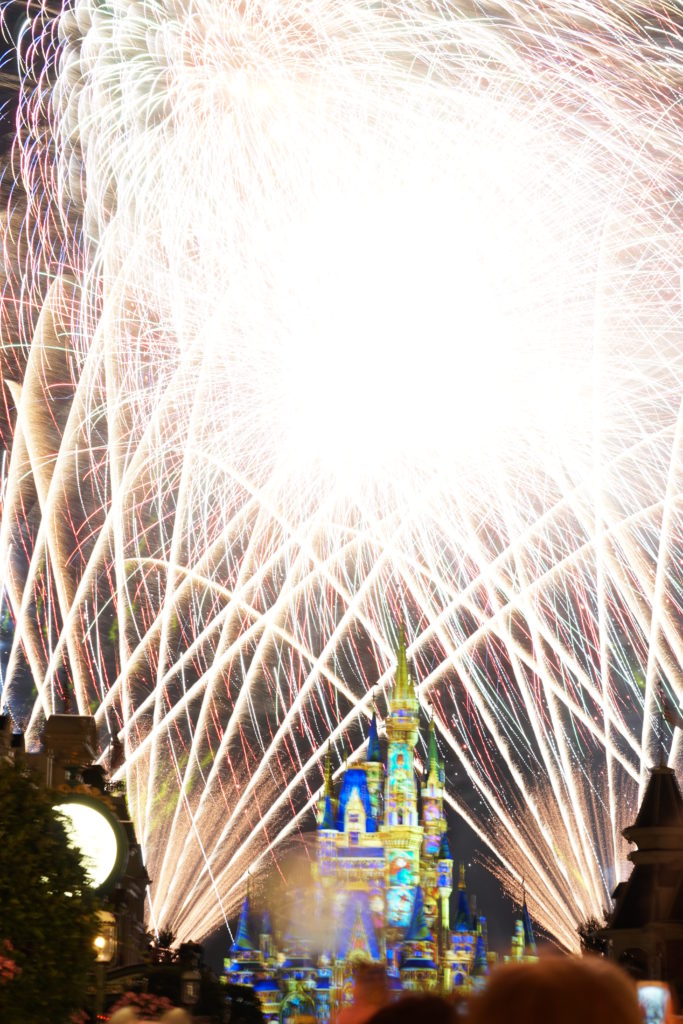 Thanks for reading and sharing in my love for all things Disney. If you have insight on this new show or you think of something I forgot to mention, message me or let me know in the comment section below. Have a magical day!

END_OF_DOCUMENT_TOKEN_TO_BE_REPLACED

36shares
We use cookies to ensure that we give you the best experience on our website. If you continue to use this site we will assume that you are happy with it.Ok