Everyone has always known that the front of your house is probably the most important part. The exterior of your home. It’s what people see when they walk or drive by and can make a lasting impression on them before you even have the chance to speak to them. But did you know there are also benefits of having great curb appeal? 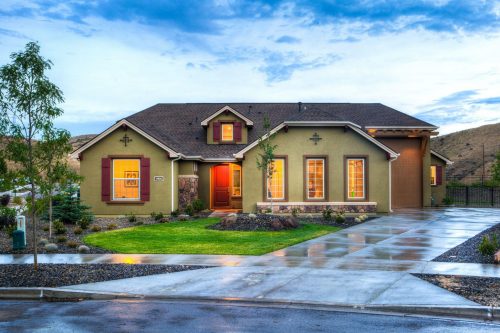 Photo by Binyamin Mellish from Pexels

This article will go over some quick tips for improving your home’s exterior, along with some ideas for how to turn it into an asset rather than just something pretty.

What Exactly Is “Curb Appeal”?

As briefly mentioned above, “curb appeal” refers either to the immediate first impact that somebody gets while looking at your house from outside or on their way inside. However, it should be noted that this is not all about making your house look pretty. It’s more than just a bunch of flowers and a well-manicured lawn.

It’s similar to first impressions in general, but with its own set of rules.

For example, do you want somebody who walks up to your door immediately thinking, “This must be where the wealthy people live”? Or would you rather they see an unkempt mess and think, “Wow, nobody even cares enough to take care of their yard around here?”

Can There Be Too Much?

There does begin to be drawbacks after a certain point. For example, the front of your house may become so overbearing that it’s overwhelming or could cause confusion or stress. More commonly referred to as “bad feng shui”.

But you don’t need to worry about it too much because most changes are small-scale and can be done gradually over time. Your house will adapt to new elements like flower beds or paint colours at its own pace. You won’t shock the foundation of your home by switching around things out of nowhere since there’s no reason for it to resist; it already knows that everything has a purpose.

The main thing is just knowing your limits—knowing where the tipping point is between tastefulness and tackiness (which can vary depending on who you ask). Like any other balancing act, this one takes some practice, but it becomes instinctive once you get it right.

How Do I Improve My House’s Exterior?

Even if you’re not an expert on landscaping or decorating, everyone can have a good looking front yard. After all, it doesn’t require any special skills beyond being able to follow directions.

Here Are Some Quick Tips To Get You Started:

Whether it be mowing the lawn or pulling out dead leaves from trees or bushes, this is usually among the first things people see when they look at your house, so don’t neglect it. If possible, try to clear off walkways and stairs too, so people aren’t tempted to trample through your flowers, or worse.

Paint peeling off of your eaves? Scratched up siding? Broken shutters? These are all things that can give a first impression of being run down and in need of repair. However, it’s important only to fix the most necessary items because nobody wants to spend money fixing stuff that isn’t broken just for the sake of improving.

You’ll often notice that people who have new homes want to “plant flowers everywhere”, but they don’t know how to take care of them. Flowers require a lot of time, water, and fertilizer before they flourish to their full potential. You don’t have these luxuries when you’re trying your best not to starve on a budget, so any spare seeds should probably be saved for something else.

This is one of those things where it’s okay to splurge. But don’t overdo it either because you will lose the effect if the paint job isn’t done well enough.

If your bushes are way out of control, nobody is going to want to go near them, let alone admire them. They can become a giant trap, especially for children playing around the yard or someone who may be sight-impaired.

Like with flowers, this takes some experience and time before you can execute this perfectly without fear of uprooting too much or taking away from what made them so beautiful in the first place. If they ever were beautiful at all.

This is where the “curbside appeal” comes in. Every detail of your house’s exterior will make an impression on somebody before they even ring the doorbell, so it pays to put some time and effort into this area, such as investing in a new front door installation. The main thing here is looking at what you already have and thinking of how you can improve on that with very little effort (or money) invested.

7.   Fix Up/Plant Flowers Around Or Near The Front Door

It’s both complementary and contrasting at the same time, but either way, it adds something extra without looking out of place.

8.   Plant Trees Or Bushes Near Windows Or Anywhere That Needs Some Height

You can do this to make your yard look bigger (and who doesn’t need at least a little more space ?), but it also gives you the chance to provide cover for your family.

This is where your money can start going down the drain. It’s very easy to get carried away with pride in what you’ve done, but pride comes before the fall, so try not to build up expectations too high, or it’ll be that much more devastating when something doesn’t go according to plan. But if you have some extra cash lying around, why not put it to good use, so people are left wondering how on earth you did all this?

The best part about being a homeowner is nobody can take anything away from you with your permission, even if they try. They can only add to the way you think about your house, so there’s honestly no reason why it shouldn’t be a place you never want to leave or grow tired of.

Put yourself in others’ shoes, and you’ll realize nobody ever asks themselves, “how will I make my house’s exterior look nice?” before buying one. They don’t even imagine it. But after moving into their new home, they slowly start to see things differently, or maybe not so slowly if they happen to like gardening or landscaping.

Whether or not you’re an experienced gardener, there are always ways of improving the way people perceive your residence just by making small changes here and there. It all starts with the attitude of “I want to make my house look nice” and eventually becomes “my house looks good”.

Previous Post: « Tips And Tricks For Wearing Flashy Jewelry Without Looking Tacky
Next Post: Want to Further Your Nursing Career? Here’s How »