I am part of the Ralph Breaks The Internet Event press tour. This post is a Disney partnered post. All opinions are my own. 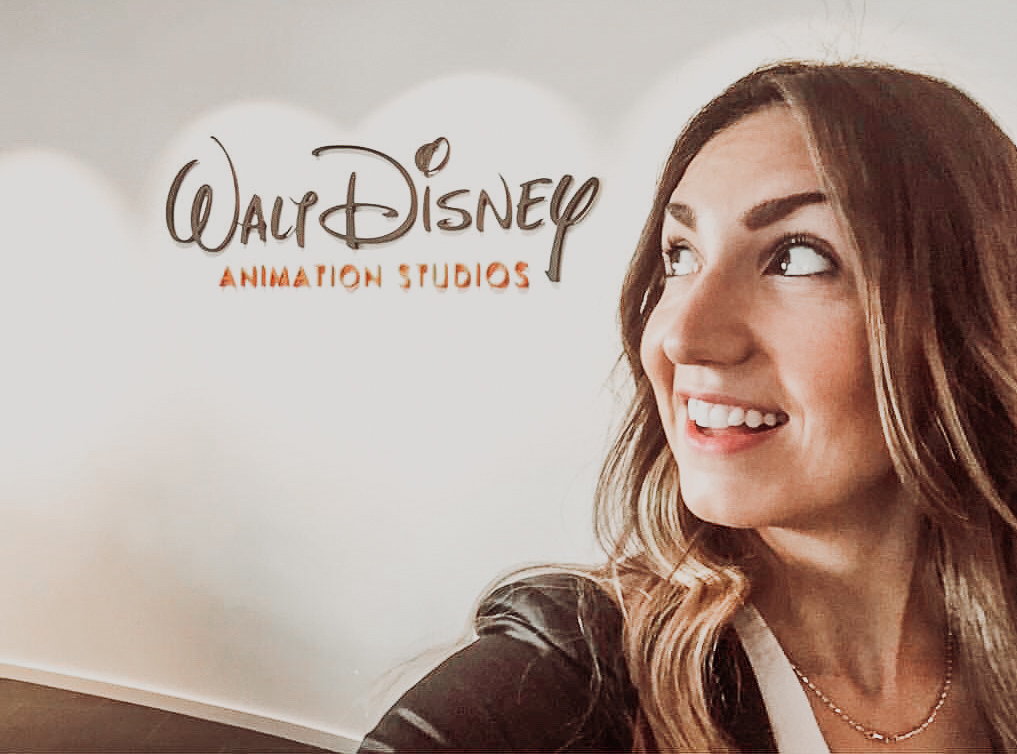 Did you know Walt Disney was so pleased after the success of Snow White in 1937 that he took his earnings from that film and built his very own animation studio in Burbank California? This is where Disney still does most of their animation work. I had chills walking around the lot, thinking to myself, “This is where Walt Disney’s dreams came true.”

This past July I had the privilege of being invited to the Walt Disney Animation Studios in Burbank, California for the #RalphBreaksTheInternetEvent. If I wasn’t already pumped for this movie, the press event definitely sealed the deal!

I was able to interview the marvelous people who helped create this film Wreck it Ralph 2: Ralph Breaks the Internet. Director Rich Moore, Director/Writer Phil Johnston and Producer Clark Spencer make up the collective team that brought us the original Wreck it Ralph, back in 2012. The first movie was so hilarious, I’m sure this next one will be too. I asked the directors, “What scene in the new Ralph Breaks the Internet have you watched over and over and STILL makes you laugh?” They responded that there is a scene in which Ralph procures a virus in the dark net area. Rich Moore says it cracks him up every time! I will be thinking of him when I finally see this scene in the new movie, Wreck it Ralph 2. It was a blast chatting with the 3 of  them. You gotta read more about My Interview with the Directors of Ralph Breaks the Internet. 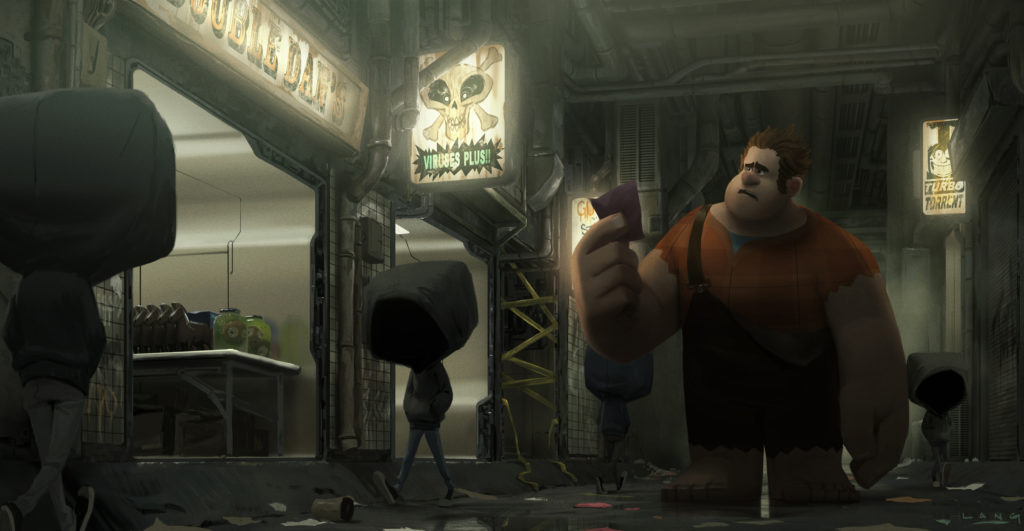 Speaking of that dark web scene, I also spoke with Matthias Lechner who is the Art Director for Walt Disney Studios. Matthias told me that the scene he is most proud of is the virus area or “dark web”. He wouldn’t reveal too much about it – but he says it’s a virtual masterpiece!

Nothing impressed me more than talking with the visual development artists! Cory Loftis was one of them, he told me that he worked on the original Wreck it Ralph movie and said when comparing the films, the animation complexity has risen tremendously. Everything is more detailed and unique. Josie Trinidad who is the Co-Head of Story echoed this message. She said, “Ralph breaks the Internet is ground breaking storytelling.” Don’t miss out on my post about the fascinating animation process in my article “Wreck it Ralph 2 | How it’s Made“. It has inside scoops from the heads of story and directors of animation themselves!

This movie is a sequel to the original “Wreck it Ralph”. The story opens where the old one left off. Ralph is breaking things while Penelope is racing in her own game. The two are best friends and life is good. Until….

A kid breaks the steering wheel of Penelope’s game. The arcade owner suggests that because the manufacturer is out of business its time to unplug the game and retire it. Penelope feels like she has lost her game and now she is homeless! Kids at the arcade find a replacement steering wheel part on Ebay! (of course they do. lol!) But it costs more than her game Sugar Rush generates in a whole year! The arcade owner declares it too expensive. And this is where the story really begins to take off.

We were treated to a clip of one of the opening scenes. I love how they depict the journey to the internet and the many expansive websites/location of the internet! It seems to me that they have captured the exact visual real life equivalent of each site, like google and eBay. Get ready to see the familiar internet names that you know, amazon, tinder, facebook, Snapchat, Instagram, etc – depicted as neighborhoods within the metotropilis that is THE INTERNET! But the most exciting and long awaited “neighborhood” featured within this movie is “Oh My Disney Dot Com” realm.

I’m sure you all have heard of and visited ohmydisney.com. Wait till you see how the creators, writers and animators have chosen to bring this website TO LIFE in Wreck it Ralph 2! It’s better than I could have imagined, Disney is so innovative.

In the movie, Vanellope is wandering the internet and finds herself at Oh My Disney dot com. She pops into a room filled with ALL the Disney Princesses you’ve ever seen waltzing around Disney Parks or waving to you from a parade float! What is better than seeing all the Disney Princesses all together in one room? Maybe seeing them redressed in casual wear?

In the princess scenes, there is a lot of tongue-in-cheek humor that will make you laugh out loud. They poke fun and pay homage to the princesses original movies. It makes you love these characters even more because you are seeing them in a “backstage” kind of way. Aurora is humorously dozing off, Belle is constantly reading, Pocahontas always has magical wind in her hair, Rapunzel sits in a chair made of her own hair, and so on and so on! They accentuate the quirks in each princesses personality and it turned out to be some of the most comical dialogue! (For example Merida is going off on a rant, but no one can understand her accent because she is “from the other network” lol. get it? She’s the only Pixar princess!)

ROYAL REUNION – In “Ralph Breaks the Internet: Wreck It Ralph 2,”

This past September, Disney Studios BROKE THE INTERNET with the epic trailer that revealed the reunion of these 14 Disney princesses!  It all takes place in the Oh My Disney dot com neighborhood! This is where everything Disney related lives! This includes all Disney, Star Wars, Pixar, Muppets & Marvel related content! I know, I’m freaking out too! I can’t wait to see the whole movie. (I did see some sneaks peeks of Princess personality clashes, Storm Troopers, Novelty Tees, and Marvel heroes – But I’ve already said too much! You gotta see this movie for yourself! It’s gonna be Legend-dary!

Who is responsible for this grand slam?

Who can we thank for the Oh My Disney dot com realm and the EPIC Princess scenes? I got to interview the fantastic mastermind, Pamela Ribon who is also the co-writer of Ralph Breaks the Internet AND the voice of Snow White for the film. She had the original idea for the princess scenes years ago, it all started simply as a “nerd dream” (her words). But to quote Pam, “Nerd dreams often become nerd realities!”

Pamela Ribon has always been creative writer. She started as one of the originally mom bloggers, back in the 90s. She wrote for TV shows, and eventually her talent let her to the top – Disney Animation Studios! One day she pitched her brilliant idea of gathering all the princesses and having Disney poke a little fun at itself. She wasn’t sure if the filmmakers would embrace it, it was risky, but she pushed forward. 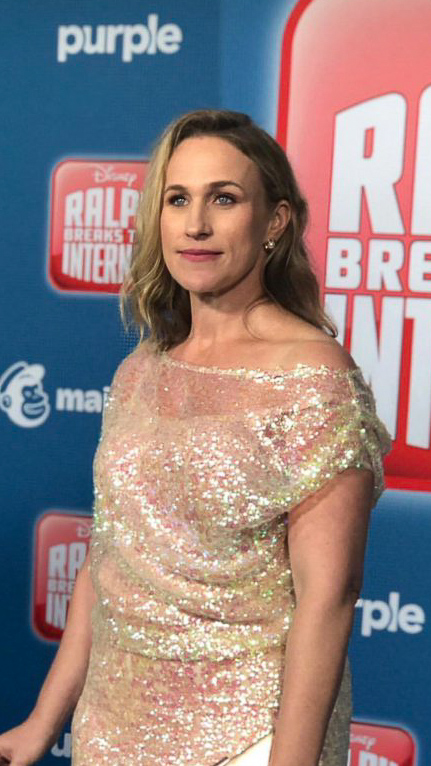 I admire Pamela for her bravery and belief in her work. After she pitched the idea to the Disney filmmakers they responded with, “Do you think we could do this?” Pamela confidently responded, “There’s only one thing to do. Write it. Board it. Put it in the screening and one of two things is going to happen: The whole world will laugh and think it’s brilliant and then it’s in the movie, or they won’t find it as funny as we do—but we’ll have put our best foot forward.” Well, the story evolved, everyone LOVED it and the scene was already a hit before the movie hit theaters! 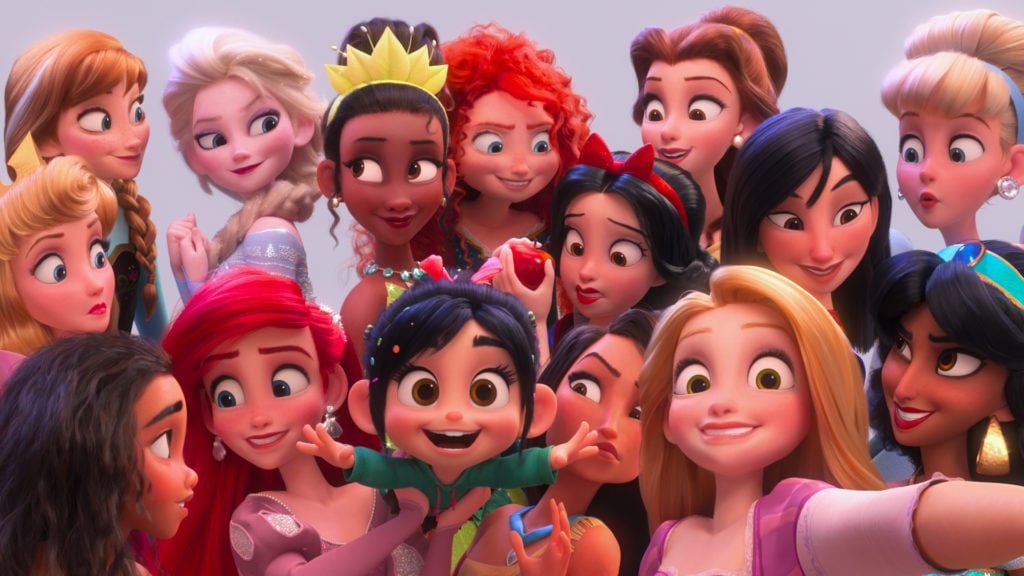 SELFIE!  In Ralph Breaks the Internet, Vanellope von Schweetz hits the internet where she encounters and then befriends the Disney princesses. Filmmakers invited the original voice talent to return to the studio to help bring their characters to life, including Sarah Silverman (Vanellope in Ralph Breaks the Internet), Aulii Cravalho (Moana), Kristen Bell (Anna in Frozen), Idina Menzel (Elsa in Frozen), Kelly MacDonald (Merida in Brave), Mandy Moore (Rapunzel in Tangled), Anika Noni Rose (Tiana in The Princess and the Frog), Ming-Na Wen (Mulan), Irene Bedard (Pocahontas), Linda Larkin (Jasmine in Aladdin), Paige OHara (Belle in Beauty and the Beast), and Jodi Benson (Ariel in The Little Mermaid). ©2018 Disney. All Rights Reserved.

“Vanellope is technically a princess, but hasn’t really been included among Disney royalty,” says Ribon. She will be after this movie! Thanks Pamela, for believing in this funny idea and sharing it with all of us.  The Princess scenes in Oh My Disney dot com are what I’m looking forward to the most in Ralph Breaks the Internet!

BTW if you wanna have some fun, go to OhMyDisney and take the “Which Wreck-it Ralph Character Are You?” Quiz.
I was Fix-It Felix! Which makes total sense, I’m a fixer!

Mark you calendars, everyone! Wreck-It Ralph 2:  Ralph Breaks the Internet is coming to our theaters November 21st, 2018! It will be rated PG, so bring the whole family after you eat too much turkey on Thanksgiving!