Disney has outdone itself with the new ride in Galaxy’s Edge: Rise of the Resistance! This new star wars themed ride is the biggest accomplishment in Disney ride imagination history!

Guests are stepping off this ride in tears, jumping around and looking like they won the lottery! Just wait till you get to ride of for yourself! There’s nothing like it in the world.

I was invited as part of a Disney International Media Event December 2019. I was one of the first to ride Rise of the Resistance and speak to the Disney Imagineers who created this epic attraction. Let me tell you more! 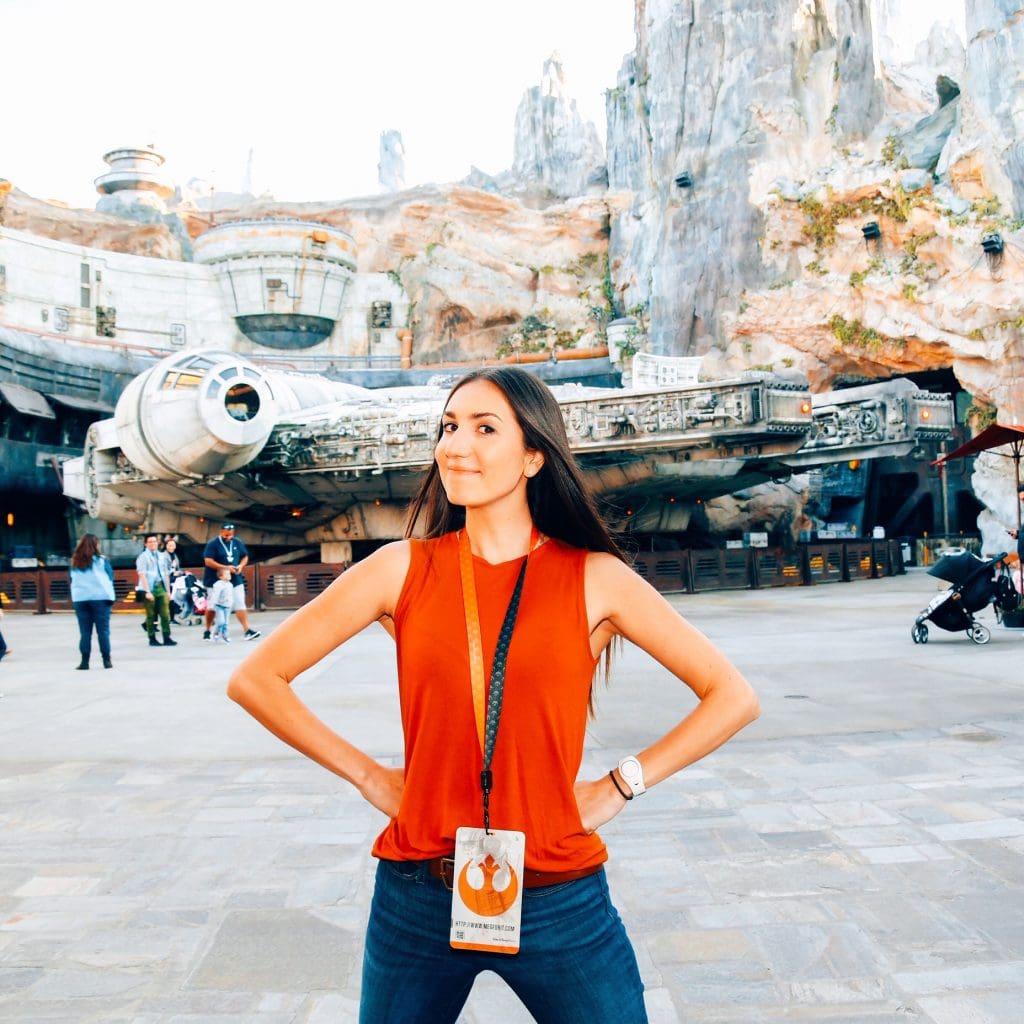 Story of the Ride

Every ride has a story. Disney wants you to feel like you have jumped into the middle of a Star Wars movie and become part of the action.

You as the guest will join the Resistance in a climactic battle with the First Order, including a face-off with Kylo Ren. 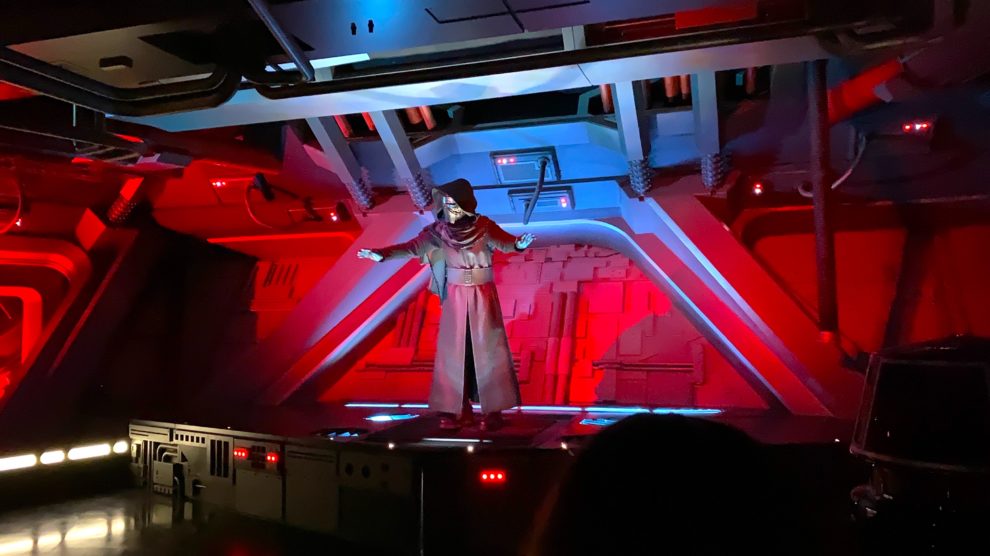 Rise of the Resistance completely blurs the lines between fantasy and reality – and that’s the best part of this ride!

*I do want to note that if guests are in a wheelchair, they will have to transfer to the ride car.

Rise of the Resistance has a ride height requirement of 40″. (3 feet and 4 inches)

Rise of the Resistance begins as soon as you enter the line! You feel like you are on the planet of Batuu, but slowly transitioning into your mission! You walk through the line and finally enter a room of control panels and futuristic maps of the galaxy. You watch a little video where you are told that you have to deliver the secret location of the rebel base. You proceed to another room.

In the next room, BB8 is navigating control panels and “talking” to the guests entering the room. You watch another video where there is a real holograph of Rey telling you all about your mission! From floor to ceiling this place is authentic! It looks like a real base! After this little “show” you proceed to the next area.

As you exit this second room there is an outdoor area with life-size ships around you. This makes it feel like your are on an airstrip about to board a ship. It’s a great place for a photo op and fresh air. After a short wait you board a ship.

On this ship, you hold onto the handrails. It feels as smooth as riding the monorail but so much cooler! It’s a simulator that feels like a ship! You are being flown by Lieutenant Bek but you get captured and pulled into another bigger ship! 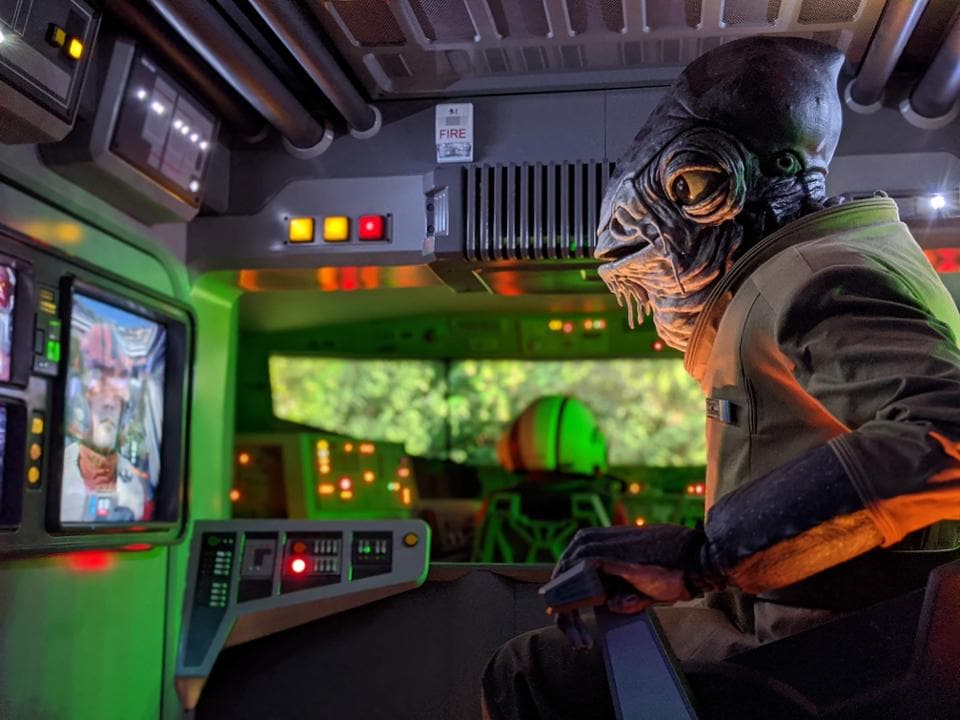 The first order sends a transmission telling you that you’ve been captured and they know you are part of the resistance! The ship stops. The side doors open (Kaa-shhhh just like how star wars doors should open).

Two First Order Officers meet you and rush you off the ship. They sternly yell, “You are prisoners of the First Order and will be interrogated! Exit this ship at once!”

As you step out of your ship you enter a ginormous hanger bay with a 50+ foot window into space. There are ships flying by, droid sounds and about 50 storm stoppers in front of you! There’s also a life size black/red Tie Fighter in the corner. This room is very overwhelming and breathtaking. You will be stunned! 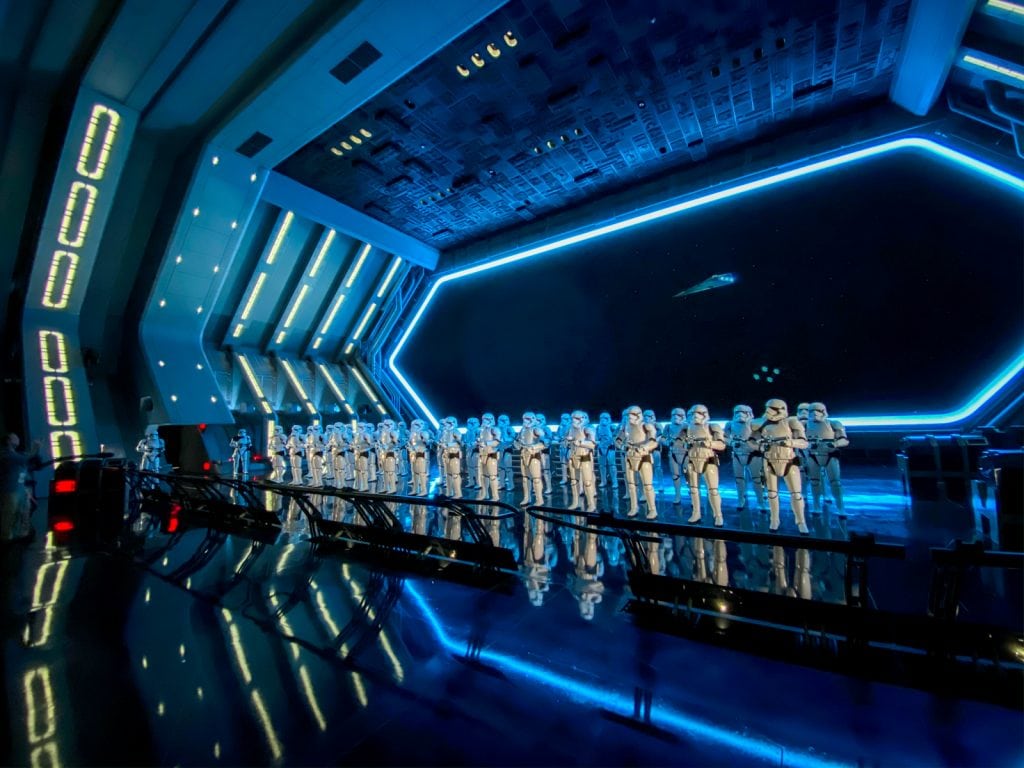 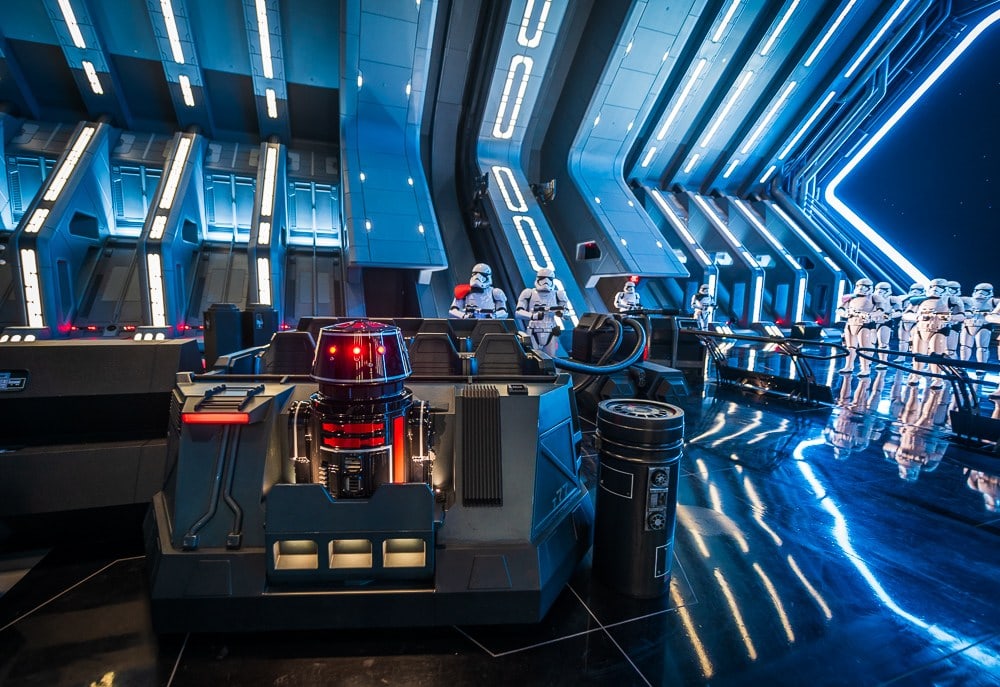 The First Order hurries you into a queue. Here you will wait throughout the ships hallways. The cast members who play the First Order Officers are legit amazing at their jobs. They should win Golden Globes for their performances! 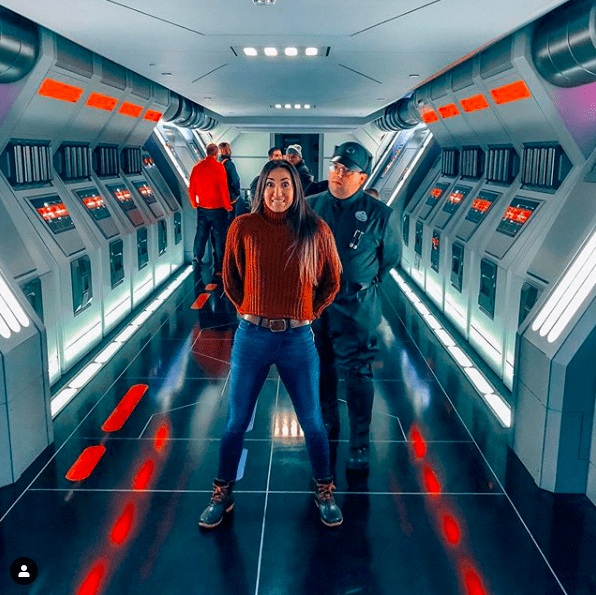 As soon as it is your groups turn to “ride”, you are hurried into another room where you will be watched by storm troopers and interrogated by none other than KYLO REN!

They leave you alone for a moment and a rebel resistance member burns a hole/door in the side of your cell to help you escape. You enter another room!

The Resistance member helps you onto the ride car. This is where you finally board the actual ride! How many can ride together on Rise of the Resistance? You sit in a car that seats 8, two rows of 4. You buckle across the waist. Each car has a droid in front to guide you. You watch a short video from Finn who tells you how to escape! Then the doors in front of you open and the trackless ride begins! 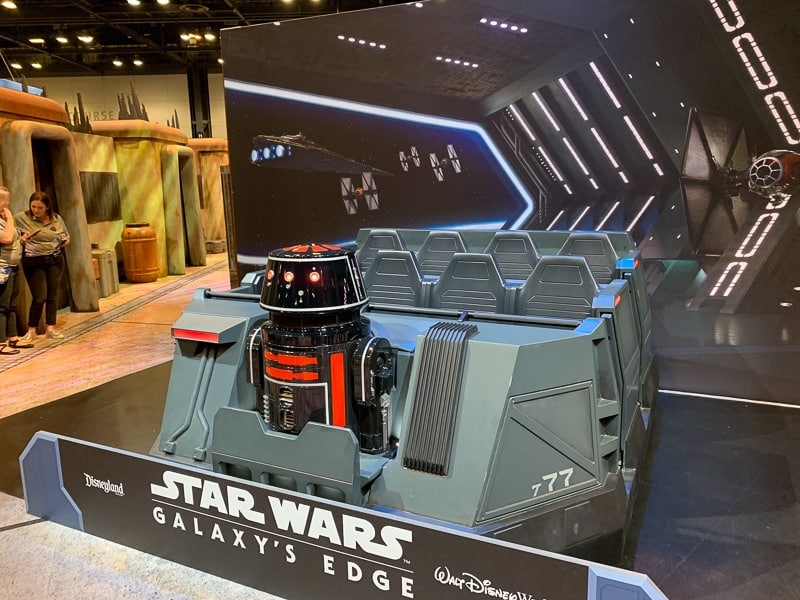 You are running from the first order, trying desperately to escape. Storm Troopers are shooting at you, Kylo Ren is using the force against you, so many obstacles. You’ll have to ride the ride to see how it all ends!

No Fastpass or Stand-by line? How do I ride?

Fans were shocked that on day 1 of opening, they couldn’t wait in line for hours to ride it. There is no fast pass offered or stand-by lines for this ride. Maybe one day they will open, but I think Disney knows they have something special here.

They learned from the opening of Pandora: Flight of Passage, that there’s gotta be a better way to organize these long queues of thousands of people. Here’s how you get to ride Rise of the Resistance:

How do I get a ticket / boarding pass to ride Rise of the Resistance?

Secrets to Know & Watch For on Rise of the Resistance

In some of the rooms, the storm troopers are animatronic and some are REAL! You can’t tell and it changes every day!

You can see life-like robots of Finn in different locations depending on which side you ride on!

When the storm troopers are shooting at you, you can see the red blaster lasers going around you and above you. I have no idea how they accomplished this type of technology! These aren’t how regular lasers works and I can’t believe more articles are freaking out about this! 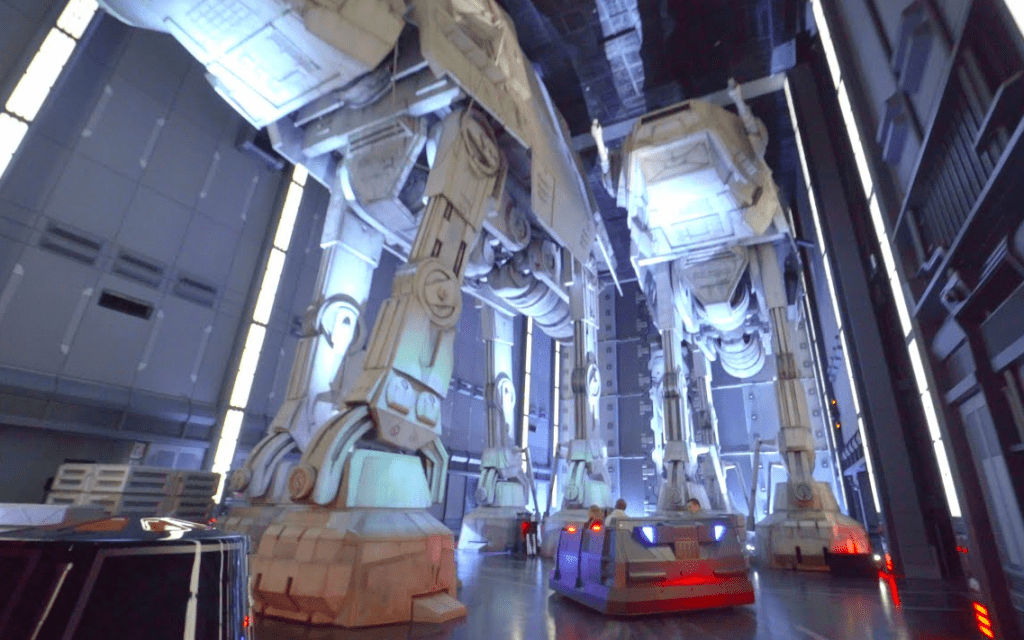 Disney doesn’t use any cheap trips or lazy digital screens. Everything on this ride is as real as it can be. I can’t wait to ride it again.

I was one of the first groups to ride this ride before it was open to the public. I recorded the whole queue line an the ride itself. You can watch the whole experience from entering the line to the ride exit!

Trust me, watching this WILL NOT spoil the experience. It will not ruin the ride. It will just get you hyped to ride it for yourself. The video can’t capture the full sound, music, feeling, thrill and emotions of this incredible attraction. It’s not a ride, it’s an adventure!

ARE YOU LOOKING FOR DISNEY DISCOUNTS? I’VE GOT THE SECRET HOOK UP! To Look Through Disney Ticket Discounts and Package deals, Click here!

Previous Post: « Spies in Disguise | Secret Formula From the Directors Themselves
Next Post: The Best Mauritius Family Holiday With A Quad Bike »