Space Force has the kind of pedigree that other shows would envy. Not only does it feature the return of TV comedy legend Steve Carrell, but reunites him with The Office and Parks & Rec co-creator, Greg Daniels. Couple this with a cast that includes an Oscar nominee, as well as a mix of old and new comedy all stars, and you have the TV equivalent of the 1927 Yankees. 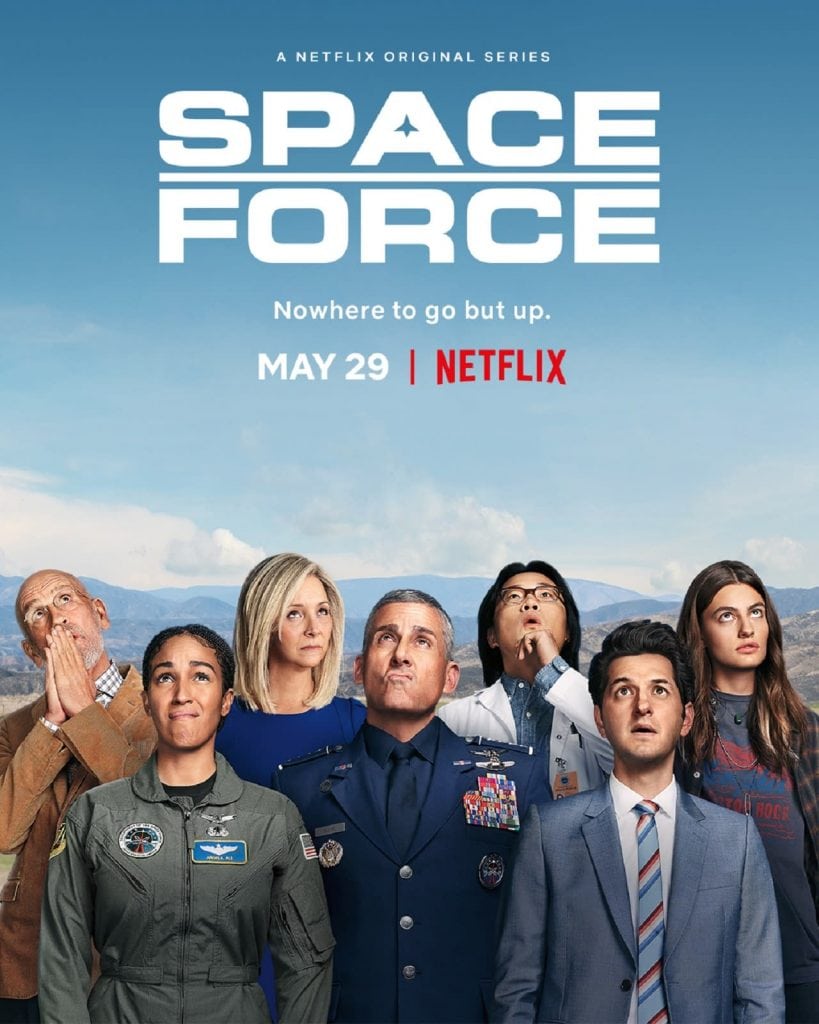 Which makes it all the more confusing that we ended up with a show that is somehow less than the sum of its parts. You’d think that regardless of anything the cast alone would elevate any material they were given, yet every episode comes off as mediocre at best. It feels like a genuine mystery that demands to be answered.

The plot of the show is that newly promoted General Mark Naird (Carrell) is appointed to head Space Force, despite lacking any qualifications or desire to do so. In a bizarre move, the plot jumps ahead one year in the first episode to show Space Force fully formed and ready to fail. Naird now lives under constant stress from his job, his fractured home life, and the whims of a petulant president. Adding to this tension is his frequent clashes with head scientist Dr. Adrian Mallory (John Malkovich), who clearly envisions Space Force as a less militarized organization.

Carrell and Malkovich form the heart of the show, and are the best part of any given episode. Carrell comes across as thick headed and domineering, but earnest in his vision of achieving something great for the whole world with Space Force. This pairs well with Malkovich’s character who is played as more sardonic and passive aggressive, forming a classic felix/oscar dynamic between the two. Although I take issue with the fact the show seems to decide randomly each episode whether or not Carrel and Malkovich are friends or enemies. If Space Force decided to focus almost exclusively on these two characters it would be infinitely better, but it’s too busy with the dozen or so other characters desperately vying for screen time. Which is the main problem with the series as a whole, it’s hopelessly unfocused.

I brought up Carrell and Malkovich’s characters because they are ostensibly the stars of the show, but they have to compete with a cast that includes Ben Schwartz, Jimmy O. Yang, Tawny Newsome, Noah Emmerich, Alex Sparrow, Don Lake, the late great Fred Willard, Jessica St. Clair, Lisa Kudrow, Roy Wood Jr., and many more who fight for the audience’s attention. It’s not impossible for a comedy with a large ensemble to find it’s rhythm; but with so many talented people appearing in so few episodes and not affecting the plot at all, it feels more like a wasted opportunity than anything else. Alex Sparrow in particular shines as a Russian spy who is utterly terrible at maintaining his cover, yet can’t be fired due to his connections. Yet he only appears three times in the course of the first season and essentially disappears from the plot when it seems like he’s about to become relevant. In fact, it’s curious how many subplots are either abandoned outright or introduced so suddenly we have no time to start caring as the plot speeds toward a climatic finish that feels completely unearned.

Space Force is at it’s best when it embraces the absurdity of it’s premise and goes wild with the possibilities, like in an episode where they have no choice but to use a chimp astronaut to try to repair a satellite. It’s at its worst when it attempts to be a political satire, which it handles rather blandly or outright moronically. It never has the guts to call out Trump by name, instead just mentioning an offscreen POTUS, and I wish it had because at least it’d be taking a stance. It tries to take a more broad aim at government and the military in general, but never manages to say anything worthwhile. When it does turn the story out of nowhere into a high stakes episode involving an incident that could potentially cause WW3, it feels like none of the characters are acting like people would in that scenario. Instead being overly sophomoric for the sake of manufactured tension.

Perhaps the best thing you can say about Space Force is that it has the potential to become better. Other Greg Daniel’s sitcoms often didn’t get any good until their second season, utilizing the first season to play around with the character dynamics until the writers figured out what direction to take. It’s possible that Space Force may one day be just as beloved as The Office, but they’d have to make some serious changes to make it even worth watching a second season.