What movies are coming out Christmas 2019? I am so glad you asked! There are a ton, but one great family friendly movie coming to a theater near you is “Spies in Disguise”. This animated film will be the perfect movie for the whole family! 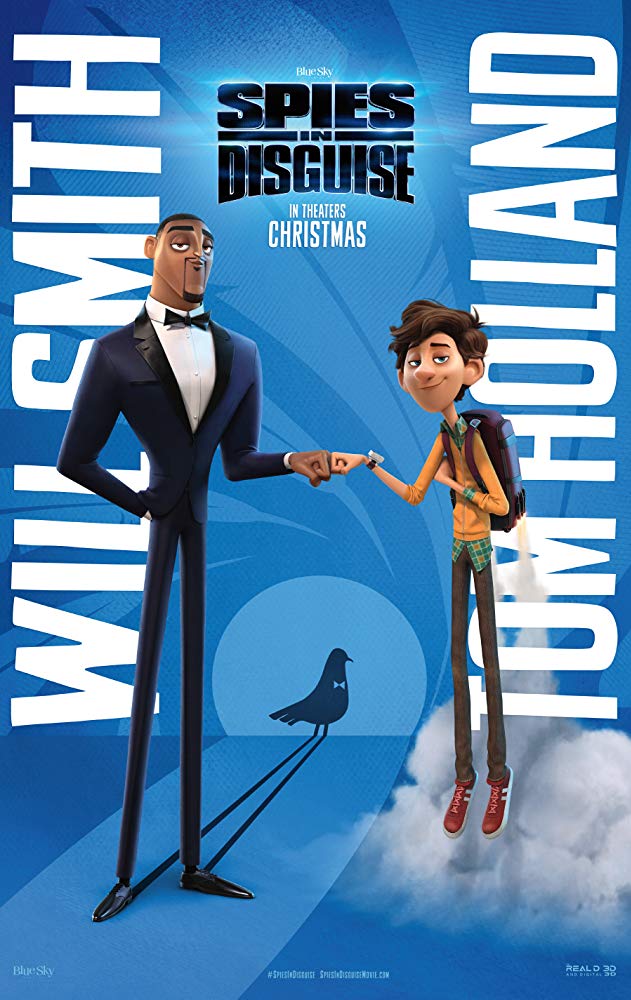 Plot of Spies in Disguise

Will Smith’s character Lance and Tom Holland’s character Walter are complete opposites. Lance has swag and Walter is a total dork. This hilarious duo is forced to team up on a mission that is critical to the fate of the world! This important mission requires an impossible disguise that Lance Sterling isn’t too thrilled about!

Lance Sterling is literally the world’s best spy. Through a short series of unfortunate events, he is turned into a pigeon! Lance Sterling must rely on his nerdy BBF scientist, Walter Beckett to save the world!

The Stars of Spies in Disguise

This movie is also voiced by some incredible actors, including Karen Gillian from Guardians of the Galaxy. Ben Mendelsohn from Bloodline, Rogue One and Captain Marvel. Rachel Brosnahan who stars in the Marvelous Mrs. Maisel. Rashida Jones from The Office and Parks & Rec, as well as artists like country singer Reba McEntire and rapper DJ Khaled. Those are some serious artists and some Emmy Award Winners!

This film is not yet rated but is projected to have a PG rating. It is directed by Troy Quane and Nick Bruno. Spies in Disguise is being produced by FOX Animation.

This year I have been invited to The 2019 Geekly Retreat for bloggers. At this retreat I will have the privelegde of interviewing the cast and film makers of Spies in Disguise! Come read about my Interview with the Directors of Spies in Disguise. It was fascinating to hear their process and the secret insights to adding themselves into the movie. You gotta read it!

Oh, and I forgot to tell you, there’s a video game coming out based on the movie! It’s called Spies in Disguise: Agents on the Run!

So what do ya think? Are ya coming with me this Holiday season to see Spies in Disguise?

I’ll see YOU at the movies!

Previous Post: « Our Complete RV Remodel Before & After | RV Remodel Ideas
Next Post: Ways to Turn Your Home Into a More Relaxing Place »

#shorts You Ever Go On Auto Pilot?
YouTube Video UCnkqXRJxp6NmAfHh8P9D7rw_BaolHtYlGWw

#shorts A Day In My Life
YouTube Video UCnkqXRJxp6NmAfHh8P9D7rw_QGdFp_XbIKE