I watched the Super Bowl halftime show in great expectation. As a cuban, I was excited to see 2 talented Latina artists on the stage and I was already pumped from Demi Lovato’s National anthem. She was incredible. (I am never NOT amazed at the artistic talent that’s out there!)

The next morning Twitter was buzzing with trending halftime show hashtags! But it seem that so many people were bothered by it – passionately.

If you were a human on facebook on February 3rd : You. Had. An. Opinion. 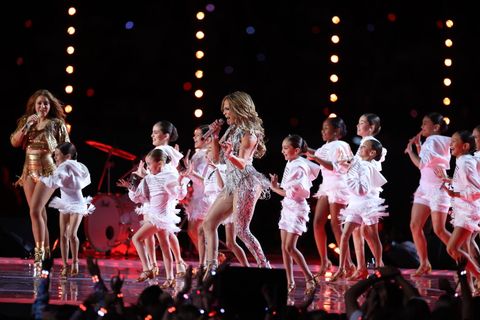 I am trying to write this article and think in a way that is not influenced by church culture, media, my personal past, or modern day society. Because public opinion does not = truth. If it’s contradictory to Gods original design, we should change our minds and stop being influenced. More on this later.

But first, here’s what I thought after I saw the entire Super bowl halftime show.

My Opinion of the Super Bowl Halftime Show of 2020

I read this quote: “Why is everyone cheering and celebrating? It’s demeaning, not empowering. Allowing others to objectify them should never be called empowering. The body is not where their power or value lies. Virtue, talents, intelligence…those are strengths. It’s sad that flaunting the body is where power and worth lies.”

I thought they were talking about the football players who are pimped and paid to destroy their bodies for our entertainment! This quote was about the performers in the halftime show! Go back and read it again.

Super bowl halftime shows are supposed to be entertaining. It’s usually a musical dance number with great special effects to dazzle everyone watching.

I was dazzled this year with Shakira and JLo’s performance. It was ALOT of physical fitness displayed. The singing was perfect, no one missed a note and they reached every range. The dancing was super difficult, the technicality of the choreography was pinnacle. I think they danced every genre that has ever existed from ancient to modern dance. Shakira jumped from instrument to instrument as easily as I drink a glass of water. They also changed costumes multiples times without missing a beat! And what about the singing in multiple languages? I couldn’t stop cheering. 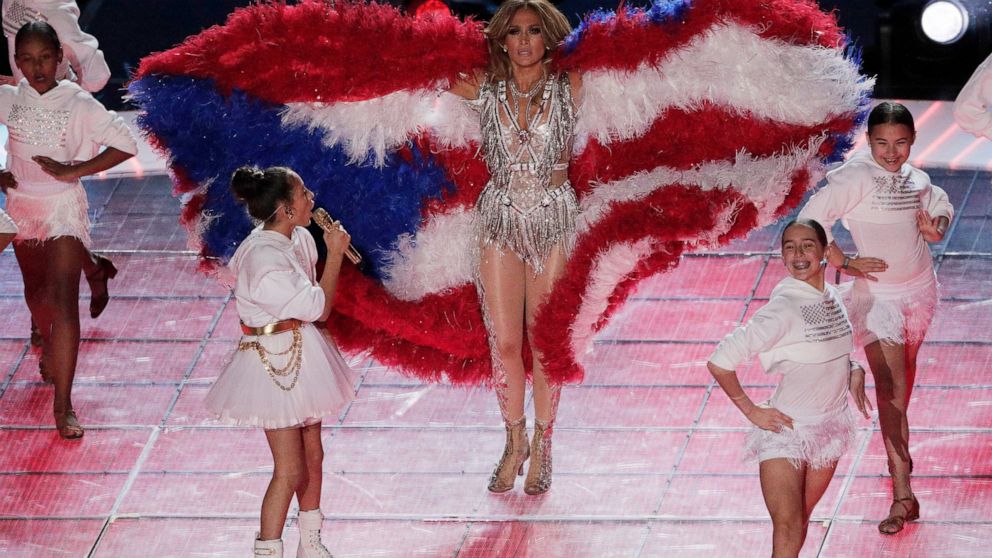 And why aren’t we talking about the Olympic level projections and special effects of the stage floor? Wow! When the entire floor seemed to open up and turn into a waterfall I was like, that’s some Disney level amazing effects!

Then…I felt that some of it was over flaunting of reproductive parts. So let’s talk about that.

Women’s Power | “My Persuasion can Build a Nation”

Humans are multifaceted beings. Each one of us are created so unique and wonderful. God has given each of us a specific genetics and endowed us with incredible talents. Sometimes, there are generalizations we can take within the categories of gender. With that being said…

Women tend to have more sexual power and persuasion than men. It’s just fact. We’ve build and destroyed entire kingdoms with it. We can use it for good or evil – just like any power. That doesn’t mean that celebrating our power is wrong. But somehow we have been taught to be ashamed of it as a form of control. 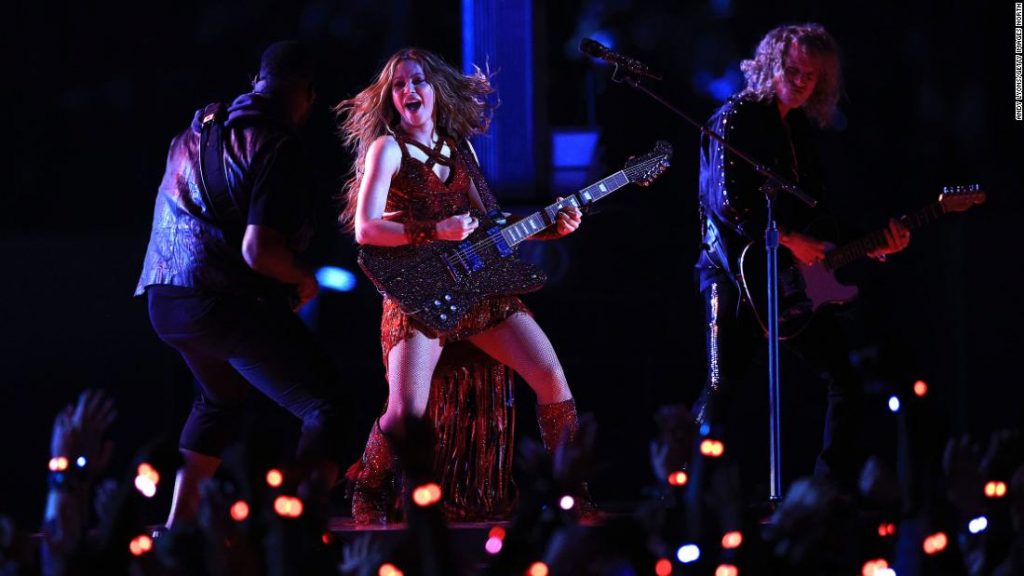 Our power should not be repressed or controlled. There is no shame in our power, our bodies, our abilities. We have been programmed to identify it in others and proclaim it as demeaning when it is in actually empowering. 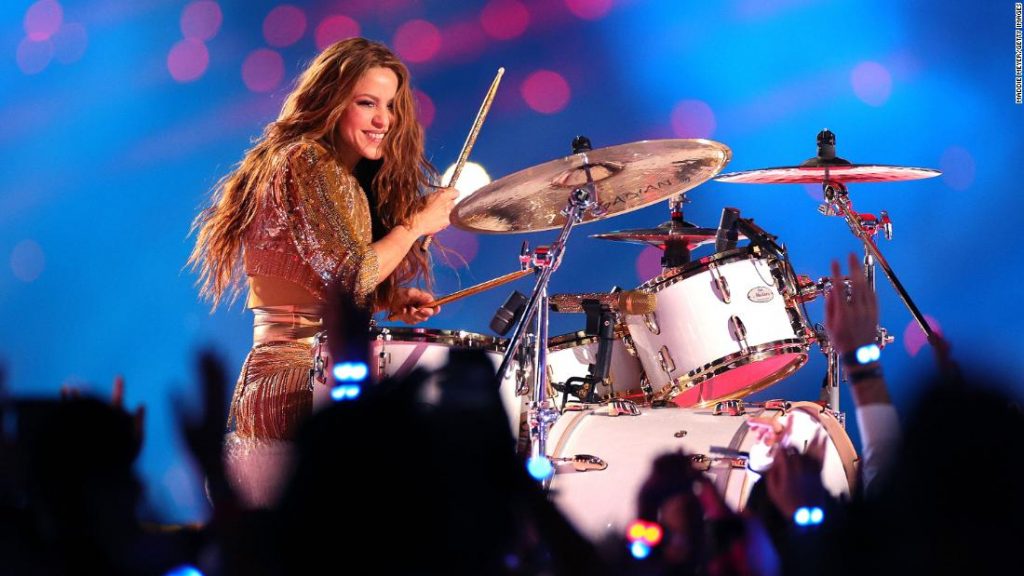 Just like any power, it can be taken to the extreme. For example, when we use that power OVER another human being or flaunt it severely to the utmost level.

And that’s where it can cross the line into vulgar. I thought JLo’s pole dancing skills were impressive! It takes more skill, muscle, grace and athletic ability to dance well on a pole than it takes to kick a ball through two yellow poles or knock people over who are running with a ball. (Trust me, I took 1 pole dancing class and I was humiliated by my utter absence of core strength. It was eye opening.) 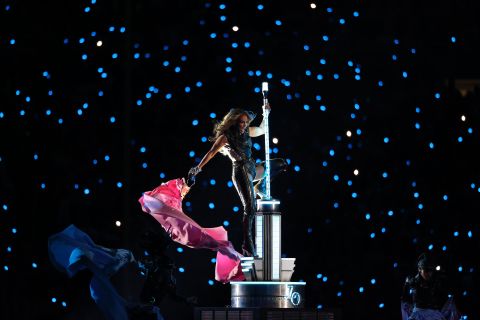 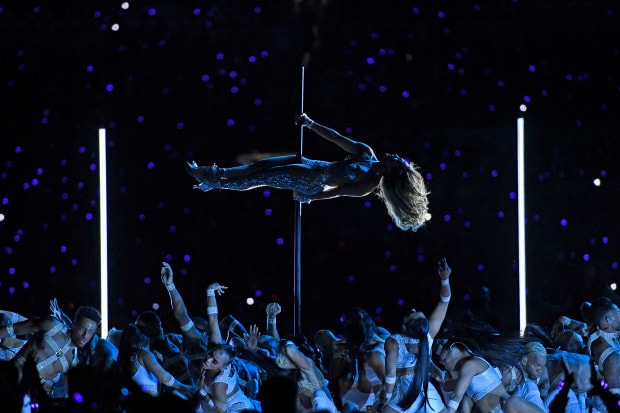 I also thought her 3second coochie grabbing slide on her knees was a little over the top. Just as I would be if a man had done it….ehhemm…Adam Levine 2019. When she bent over and nearly had an a-hole slip – I audibly gasped and said a prayer for the costume stitching.

I do want to always make it clear to women that no matter what you wear or how you move : YOU ARE NOT RESPONSIBLE FOR A MANS LACK OF SELF CONTROL.

Women, do not tone down your beauty or your confidence because of the lack of boundaries we have put on men. It is enforcing the objectifying of women when we put MORE boundaries on women’s bodies and LESS on men’s bodies. The shame is not on you, so bloom to your full potential.

Sorry, I just have to repeat myself and preface this section with: Humans are multifaceted beings. Each one of us are created so unique and wonderful. God has given each of us a specific genetics and endowed us with incredible talents. Sometimes, there are generalizations we can take within the categories of gender. With that being said…

A man’s power tends to be physical strength. It’s just fact. Women can start wars but mostly men are sent to fight them because of their brute strength. And it’s great. Men should be allowed to celebrate that strength. Celebrate your power! Kiss your biceps if you have em!

Just like any power, it can be taken to the extreme. When we use that power OVER another human being or flaunt it severely to the utmost level. In the masculine realm, the stereotypical power being taken to the extreme would be MMA fighting, duels to the death, or most events that took place in the Colosseum. 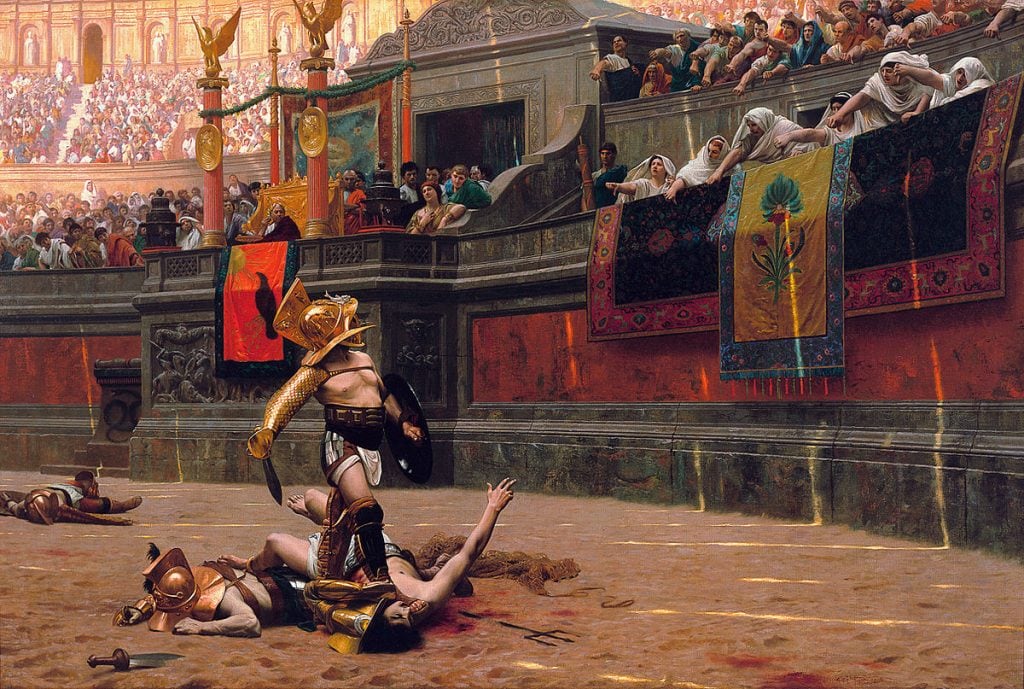 For some strange reason, modern day society celebrates the extreme grotesque displays of male power. Why? I believe it’s just as vulgar for a women to be flaunting her exquisite naked body as a domination over men – AS IT IS – for men to be beating each others bodies till they are broken and bloody. 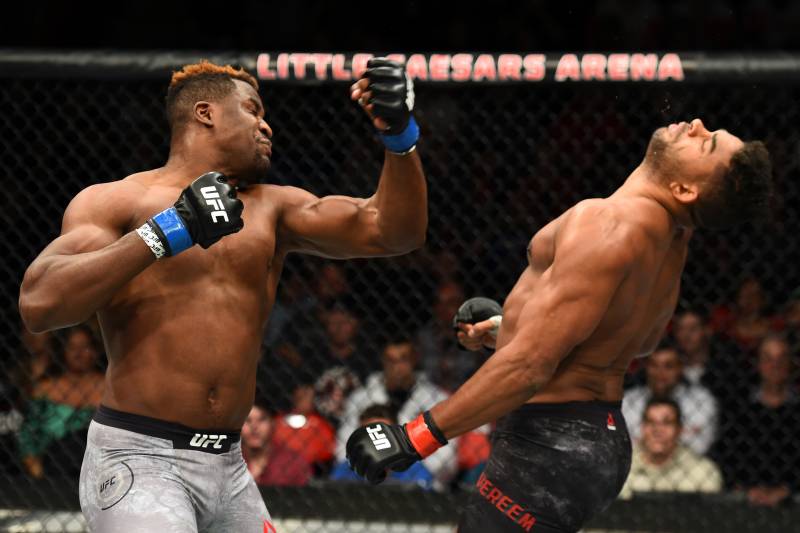 Yes, men are sexual beings too. They cross the line to vulgar when they OVERLY flaunt their sexual parts as well. Grabbing their crotch, rubbing their bare chests, anything in Magic Mike. 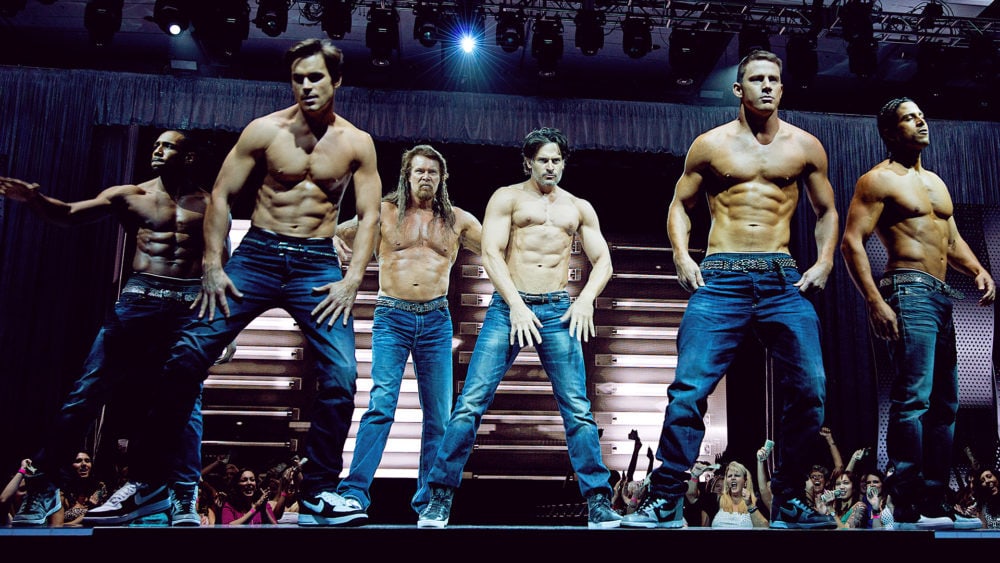 If you find pole dancing demeaning – why don’t you find those demeaning as well? Different scale? Oh I get it. How about we change our minds instead of living out the program we have been told to believe.

A Balance of Respect Between Men & Women

Individually we all have our gifts. There are leaders, artists, and nurturers in each gender. We all have our individual power. Let’s celebrate each others power when it is displayed.

Like when a man bobs and weaves his way down the court and flies inhumanly far to dunk a basketball over his opponent. WOW, that’s impressive. Or when a man pitches a ball at 100mph and another man hits that ball with so much force that it flies nearly 600 feet ( Joey Meyer 1987) – that’s empowering. 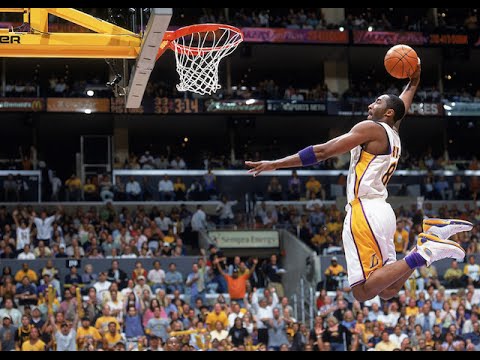 When a woman can grow 2 babies inside her body at once, birth and feed them with her body – then get up and sing to the utmost skill set, while dancing proficiently, playing multiple instruments, all in front of millions of people on a stage. We watch her in awe!!! Because if a man got up and did that, in that outfit, with those moves – it would not be as powerful or entertaining. That’s empowering. 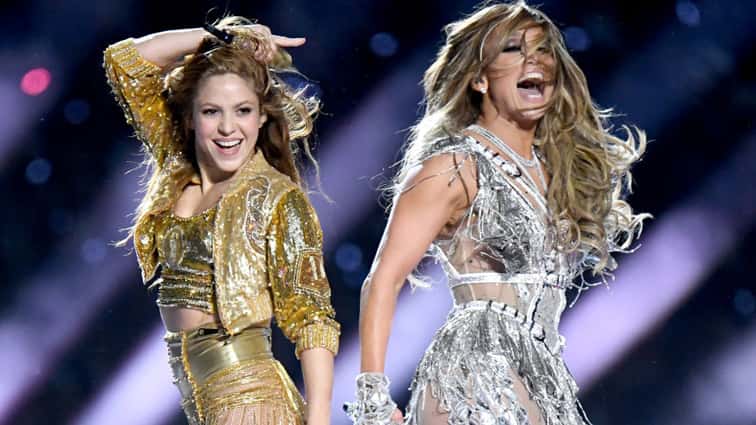 Advice for everyone: There’s a fine line between using your allure to attract and being crude. There is virtue and dignity in sexuality, let’s not brutalize it. Let’s be wary of excess and display value to our bodies. We only get one!

Teach boys that they are more than just their strong bodies – intellect and character also has value. Teach girls that aside from their intellect and leadership, their bodies are powerful and not be shamed.

A Message to all the Sexually Repressed Religious People

I’ve been in the christian culture world since I was born. I don’t remember a time where the general consensus of church people WASN’T all about putting walls between them and “the world”.

They were always looking for something to be outraged about. Something they could point out in society that would make them look and feel more holy. It was always people at the top of their game. Successful rich people or huge performances.

But what about the beloved high level Christians who end up soliciting sex in mens bathrooms or pay for their mistresses abortions?

Where is the outrage and facebook threads about the rampant sexual abuse happening in the Christian brethren assembly “New Tribes Missions”?

It feels like the current christian culture is a mutated form of the original that has been heavily influenced by the negative aspects of modern American society sprinkled with judgement of others and quests to be so isolated in self righteousness that they are more of a closed cult culture than a group of loving inviting followers of Jesus Christs teaching.

We all want to belong but why does that mean we have to isolate others to have a place? If you wanna separate yourself from the crowd – be so loving, so generous, so kind, so “christ-like” that your non-judgement is what makes you different from society. Stand out for living what Jesus called “the greatest commandment”: “‘Love the Lord your God with all your heart and with all your soul and with all your mind and love your neighbor as yourself” Matt 22:36-39

Art is more difficult to quantify than sports. Sport is quantified by points and the ability to gain points and keep the opposers from gaining points. It’s a linear measurement.

In the end, performance art is just that…ART. We can love it, we can not care for it, but we should respect the artists hard work. We will not degrade the artists by forced objectification because we don’t appreciate the art.

P.S. I did not mention the male performances in the show because I felt like they were such a small role and were not impactful.

If you haven’t seen it, here is the entire halftime show to refresh your memory:

Come to your own conclusions, as you will. I hope my article spurred some thoughts in you and at the very least encouraged you to fight the influences while you seek to live in truth.

Previous Post: « How To Keep Your Home Safe If Your Child Has Allergies
Next Post: I am going to Disney’s Creators Celebration 2020 | MegForIt »

END_OF_DOCUMENT_TOKEN_TO_BE_REPLACED

79shares
We use cookies to ensure that we give you the best experience on our website. If you continue to use this site we will assume that you are happy with it.Ok