Fans of big-screen musicals, you’re in for a treat! Directorial legend Steven Spielberg has remade the classic West Side Story for modern audiences that will bring us to an epic world of vibrant and jaw-dropping musical. 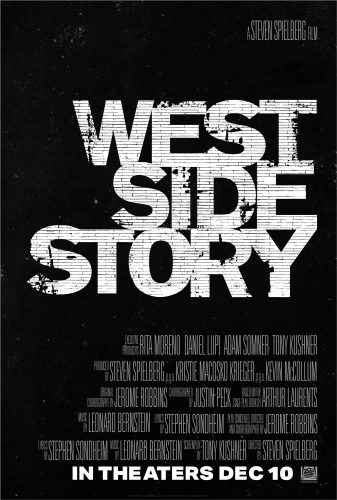 Imagine New York City in the 1950s — big, busy, and beautiful. Parts of the city shine with wealthy elegance while others toil in hard work. In this world, the Jets and the Sharks are two rival gangs in the same neighborhood.

Two teenagers, Tony and Maria, meet at a school dance and immediately begin to fall for each other. But being caught on opposite sides of a turf war between the Sharks and the Jets complicates things.

What comes next is an epic story of forbidden love, enduring friendship, and the ties that bind, while highlighting intense musical numbers and dances!

The Cast and Creative Team

Looking at the first critical reactions and early reviews, it seems that West Side Story delivers on all fronts. The cast list is also something to celebrate! It features both relative newcomers like Rachel Zegler (Maria) as well as more established actors like Ansel Elgort (Tony) of The Fault in Our Stars and Baby Driver.

But the most exciting casting announcement by far is the return of Rita Moreno as Valentina. Rita Moreno won an Academy Award for her portrayal of Anita in the 1961 original. This is sure to draw fans back to box office.

The team behind the camera is nothing to scoff at either. Penned by Tony Kushner, an Academy Award-nominee and Pulitzer Prize winner, the script promises to be sharp, dramatic, and memorable. Tony Award-winner Justin Peck serves as choreographer, so audiences can rest assured that the dance numbers will be lively, infectious, and beautifully realized. The songs which are originally written by Arthur Laurents, Leonard Bernstein, and Stephen Sondheim have lost none of their sparkle or charm in the sixty years since their inception.

Surely, remaking a classic as beloved as West Side Story can seem intimidating, and some audience members are skeptical, especially those who grew up watching the original. The 1961 film is both a cinematic and cultural landmark and has enjoyed fame for the past six decades. But with rave reviews and a team this talented, it’s hard not to be excited about the results.

It’s been a rough few years for the world and we are in need of something that will surely delight us. The riveting love story and glorious songs of 2021’s West Side Story may be just what we need to send us leaping to our feet!

The film opens in US theaters today December 10th! For tickets and theater locations, visit: http://gofobo.com/WestSideStoryImax

Previous Post: « BACK TO THE OUTBACK | Full Review, Cast Interviews, & More!
Next Post: Learning To Live With ADHD »