The Holiday season movie you have been waiting for! 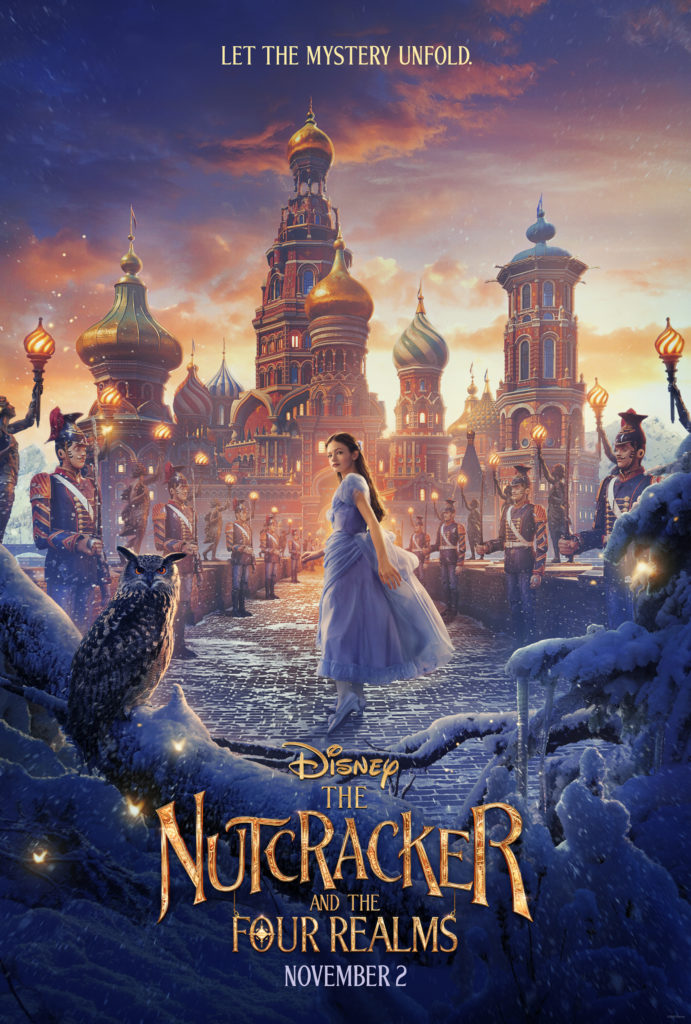 If you grew up watching the Nutcracker every holiday or dancing the nutcracker for your ballet recitals you understand the intricate part this story holds. Disney is well aware and have crafted the perfect live action magical film for the whole family to enjoy. 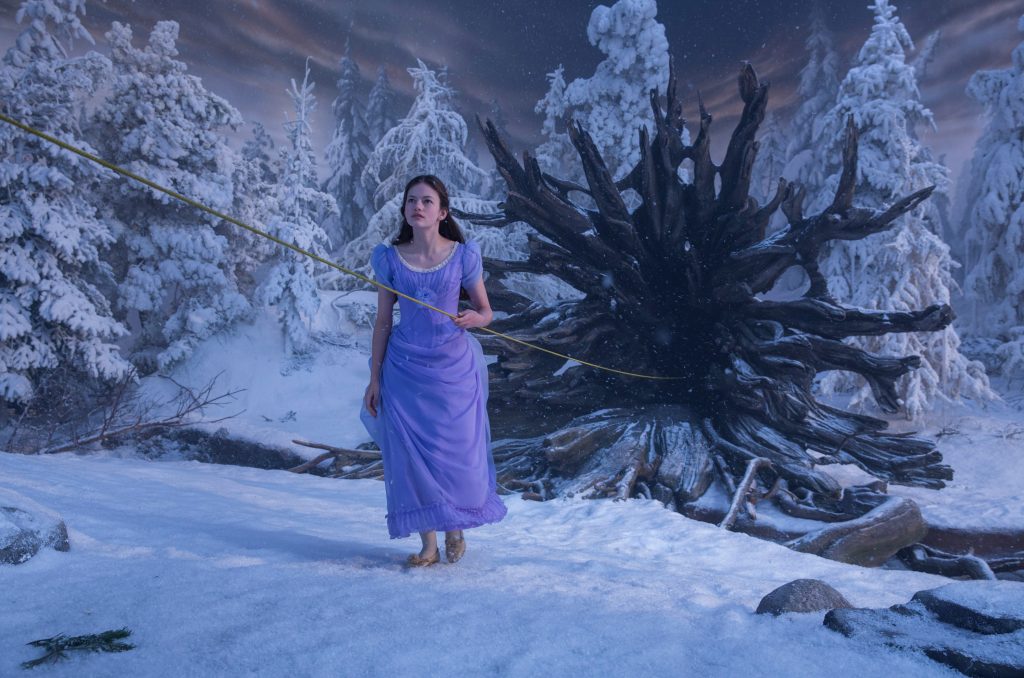 Mackenzie Foy is Clara in THE NUTCRACKER AND THE FOUR REALMS

The star of the movie The Nutcracker is a lovely little girl named Clara (played by Mackenzie Foy). Clara’s character desires a specific key. This key can unlock a box that holds a very special gift gift. It is a golden thread, presented to her at her godfather Drosselmeyer’s (Morgan Freeman, yeah I said flipping Morgan Freeman!) annual holiday party that leads her to the coveted key. But then the key somehow disappears into a strange and mysterious parallel world. Cue the beautiful cinematography! 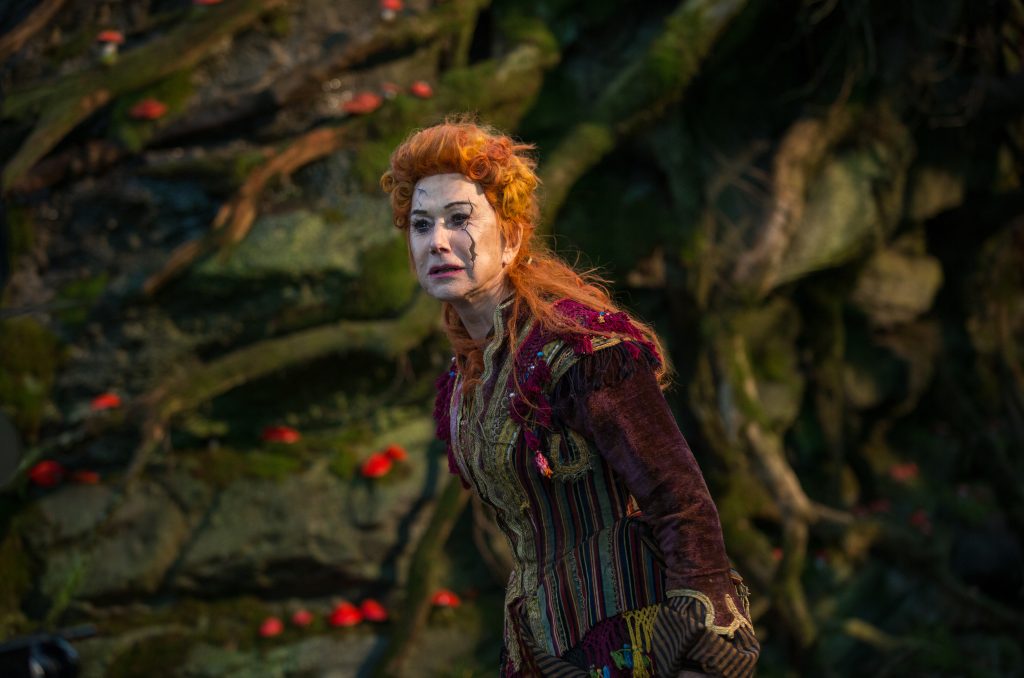 Helen Mirren is Mother Ginger in Disney’s THE NUTCRACKER AND THE FOUR REALMS. 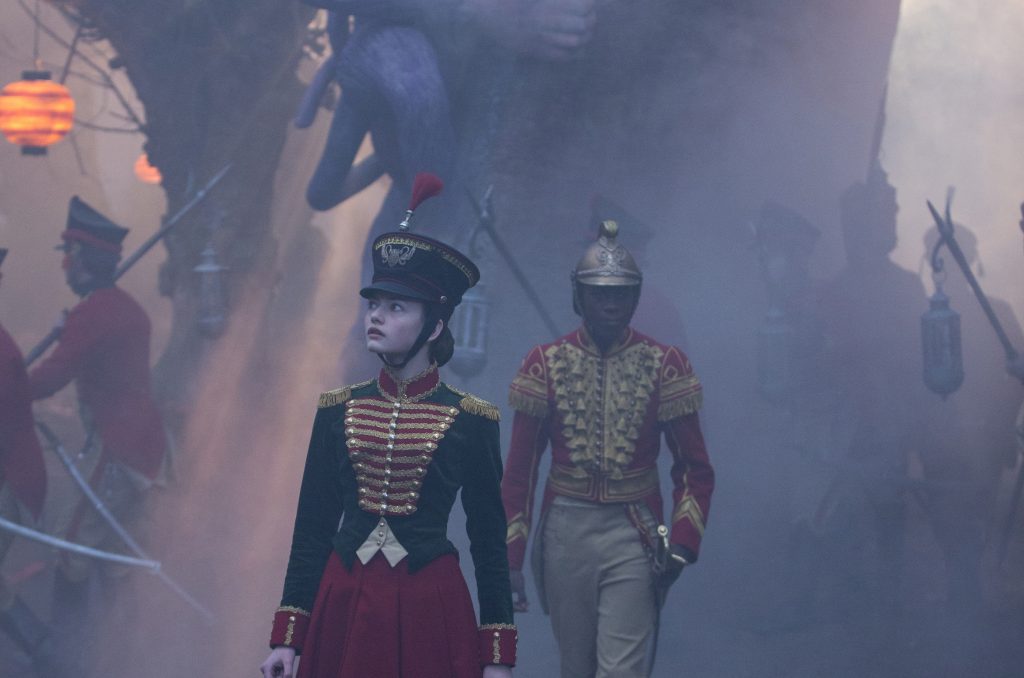 Clara (Mackenzie Foy) and Phillip (Jayden Fowara-Knight) visit the Fourth Realm in Disney’s THE NUTCRACKER AND THE FOUR REALMS.

Inside this visually stunning world, Clara meets soldiers and a gang of mice who rule over the 3 realms. Land of Snowflakes, Land of Flowers and Land of Sweets. Clara and a solider (or Nutcracker?), Phillip must brave the ominous Fourth Realm, home to the tyrant Mother Ginger (Helen Mirren! Yup, This movie has star power!), to get back Clara’s key. They will hopefully retrieve the key and get back to their stable and peaceful world.  There is a gorgeous sugar Plum Fairy with almost cotton candy like hair played by the delightful, Keira Knightley! 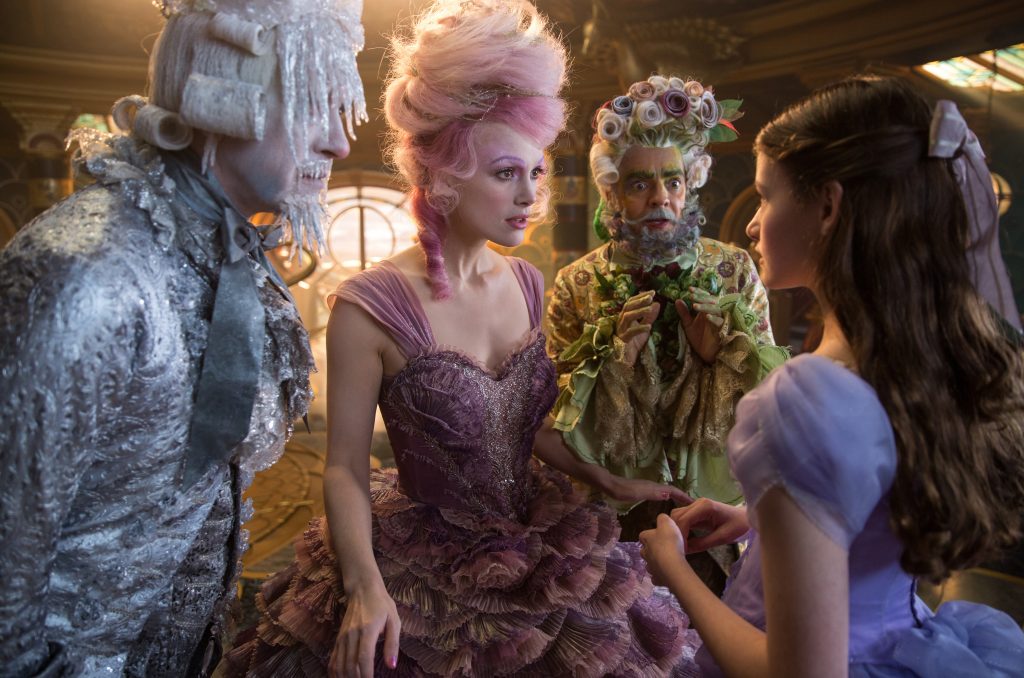 Richard E. Grant is Shiver, Keira Knightley is The Sugar Plum Fairy, Eugenio Derbrez is Hawthorne and Mackenzie Foy is Clara in Disney’s THE NUTCRACKER AND THE FOUR REALMS. 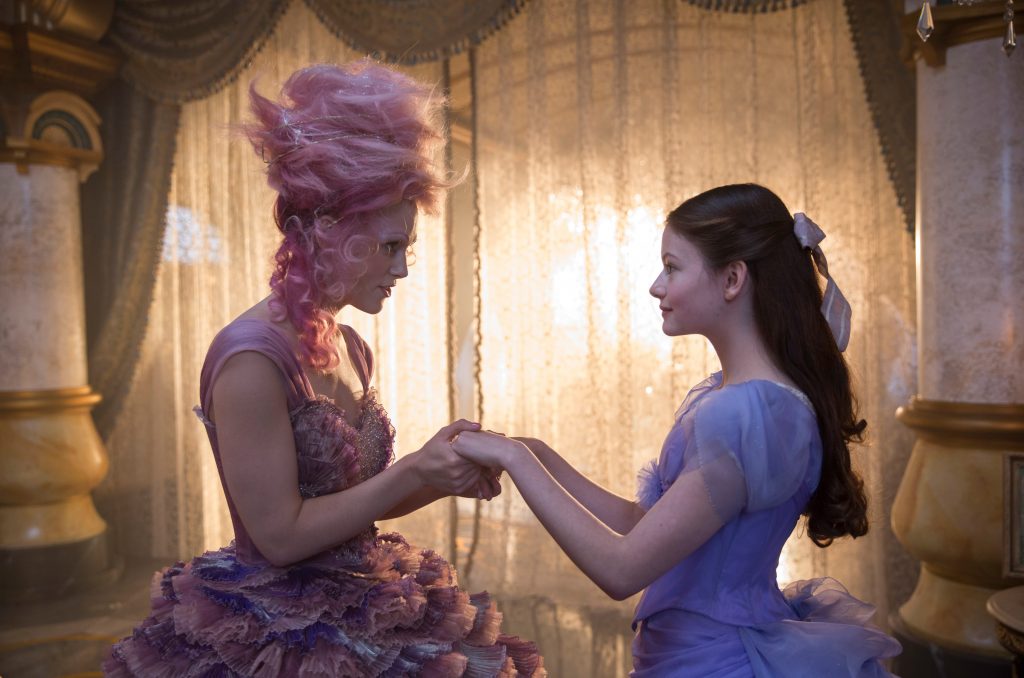 Keira Knightley is the Sugar Plum Fairy and Mackenzie Foy is Clara in THE NUTCRACKER AND THE FOUR REALMS. 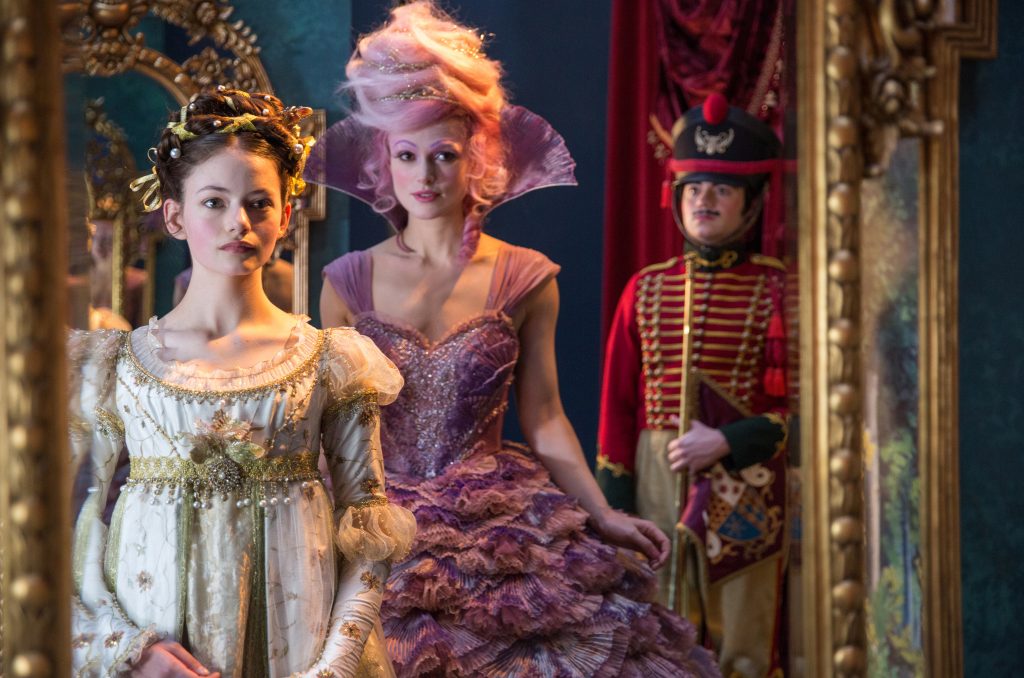 Mackenzie Foy is Clara and Keira Knightley is the Sugar Plum Fairy in Disney’s THE NUTCRACKER AND THE FOUR REALMS. 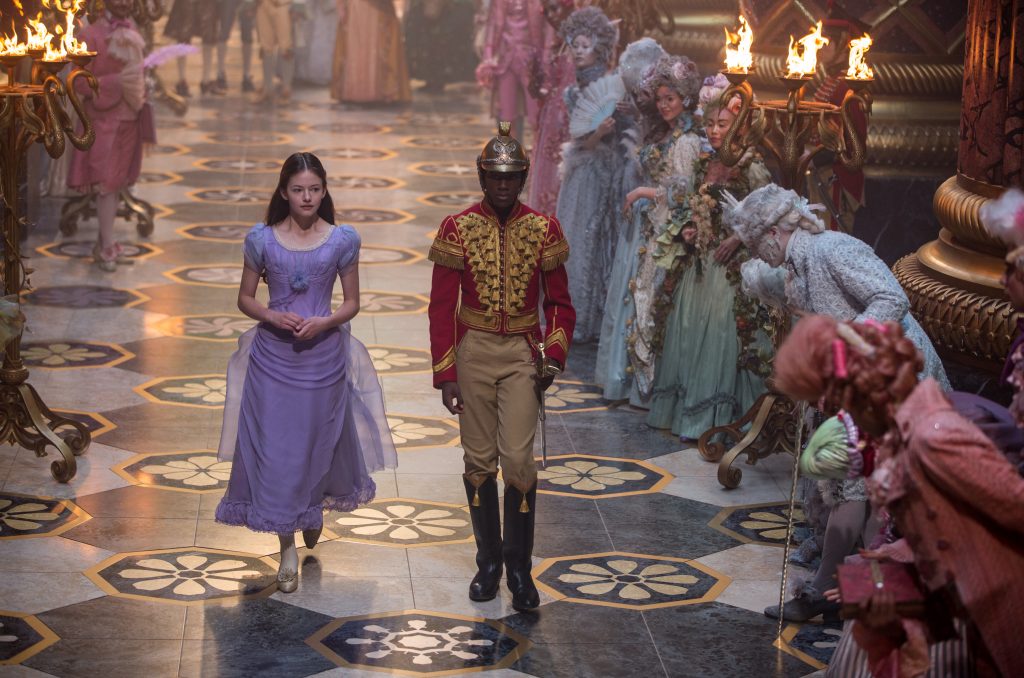 Mackenzie Foy is Clara and Jayden Fowara Knight is Phillip in Disney’s THE NUTCRACKER AND THE FOUR REALMS.

The ballet version of the Nutcracker was adapted in 1891 nd her to Tchaikovsky’s music for the Russian Imperial Theater. It premiered days before Christmas in 1892 and how it has become a Christmas tradition for years. The New York City Ballet first performed George Balanchine’s “Nutcracker” in 1954. 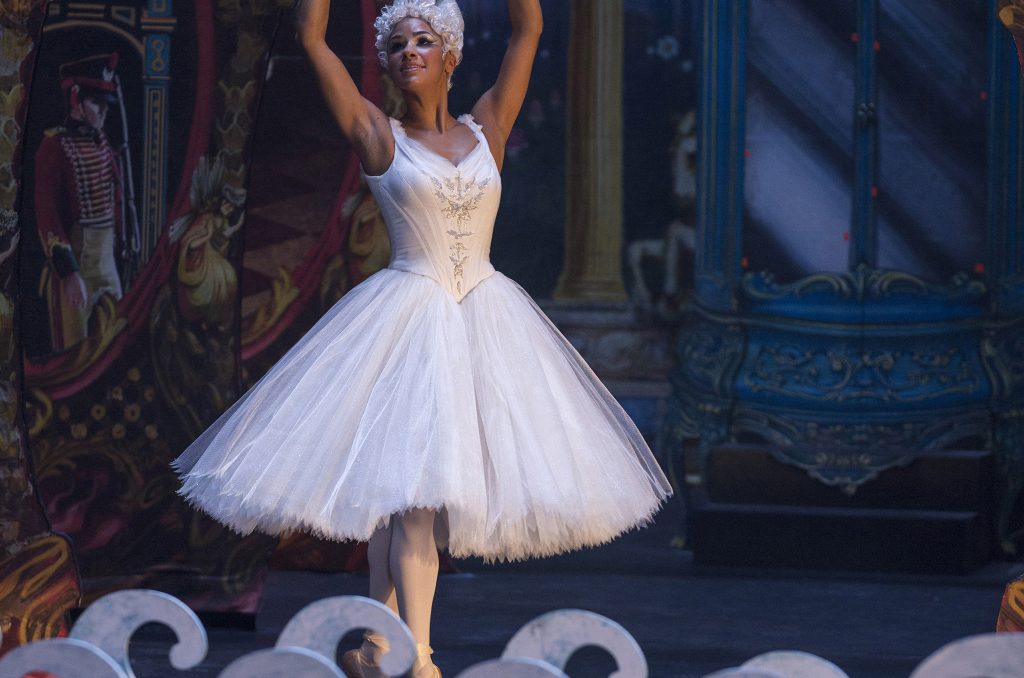 Misty Copeland is the Ballerina Princess in Disney’s THE NUTCRACKER AND THE FOUR REALMS.

I recently went to see this with my kids and my grandmother. We all enjoyed the impeccable Disney execution of the Nutcracker story. My kids said they would definitely see it again. My grandmother said it will be a classic comparable to “Wizard of Oz”. I agree! I want to make this movie a yearly Christmas tradition in my Disney family.

My favorite part was the costuming! Wow, the costuming was intricate and brilliant with delicate details. Mackenzie’s character wears some beautiful cap sleeves, empire waistlines that were overflowing in lace and tulle! The most eye catching costume was the Sugar Plum Fairy costume! I want to be her next year for halloween! By the way, there is an unexpected sugar plum fairy twist: which sounds more like an ice cream flavor than a plot story – but it is!

Misty Copeland is the epitome of passion stirred with grace. The manner in which she moves her head and fingertips is simply other worldly! I feel emotion when she dances! It was obvious why Disney chose her as the lead ballerina for this movie.

The capable female with her best friend being a kind solider of color is one example of the social norm that I want my son and daughter to soak in. I want their entertainment to reflect the world they currently live in: mixed, inclusive, and working together for a greater good.

One of the special little treats of this movie was the character that the comedian “Jack Whitehall” played. He is a beloved comic and I adore his performance in this movie. His delivery and physical comedic tricks really add a needed element to this movie.

Ultimately, I am sad that this movie is and was inevitably overshadowed by Wreck it Ralph 2: “Ralph Breaks the Internet”. The Nutcracker is the perfect wintery whimsical treat for this holiday season. 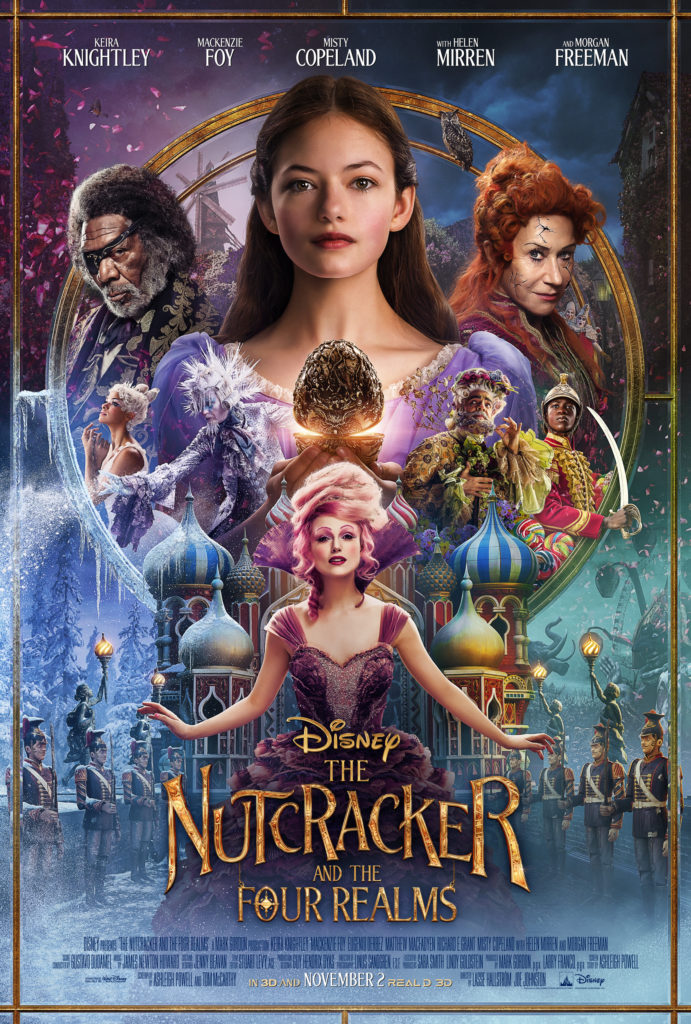