For fans of Friends, the popular sitcom which revolved around the lives of six friends in New York City, it has an allure like no other. Ever since that first introduction to Chandler, Joey, Monica, Phoebe, Rachel, and Ross back in 1994, fans have looked to head to some of the iconic spots depicted in the show.

Back in its heyday, the show made instant stars out of the six unassuming actors who appeared in that fictional coffee shop set in the bosom of the city. It grew to become a series watched by tens of millions every week, with ‘The One After The Super Bowl’ drawing an audience of over 52 million people. Such was the popularity of the show, there were books, clothing lines, and its reach even extended into digital media too. A video game, ‘The One With All The Trivia’ was available on the gaming console of choice at the time, the PlayStation 2.

No one expected the show, which ran for ten years, to still be popularizing the city to this day. But with the cult series recently being streamed on HBO Max and the subsequent reunion special being viewed by millions across the world, Friends is firmly back in the heart of popular culture once again. Aligned with the renewed success, there has been an influx of new merchandise along with the almost inevitable move into the realm of modern technologies. Friends Slingo is a title on Foxy Games, and is one example of how the brand is still recognizable today. There’s also the likes of the ‘Friends 25’ app which allows the modern smartphone savvy user the chance to add stickers to their photos or videos to post on social media.

Whilst the merchandise, games and even the actors look a little different than they did back in the ’90s. The locations in which the show was based, remain iconic and you can still visit them to this day. So, let’s take a look at some of the places which were made famous by six of the most recognizable people in popular culture. 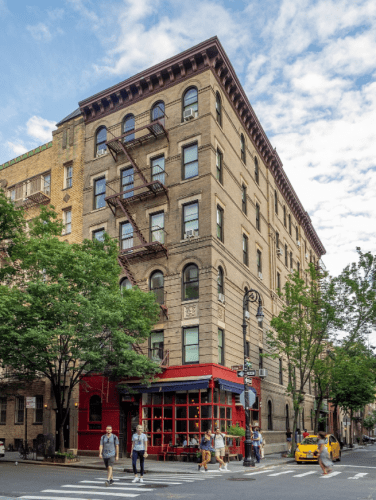 The coffee shop as we mentioned is the first place where we saw the cast all come together in episode one, but more memorable was the moment in season 2, episode 7. ‘The One Where Ross Finds Out’ concludes in the doorway of the coffee shop, with the moment where Ross discovers that Rachel has feelings for him. Whilst the coffee shop doesn’t exist, the building on Bedford Street in New York is a restaurant called, ‘Little Owl’ but the exterior is unmistakable to fans of the show.

If you’re standing on the corner in front of ‘Little Owl’ you only have to take a few steps and look up just to the right of it, to see the location of the apartments that much of the filming in Friends was based upon. Whilst we know that the interior of these buildings was built on a set miles away in Los Angeles, true Friends aficionados will appreciate taking a selfie outside the building. Imagine being in the hallway as the door to Monica’s apartment was open in ‘The One Where No Ones Ready’, and hearing Joey scoff: ‘Could I BE wearing any more clothes!?’ It’ll be sure to raise a smile. 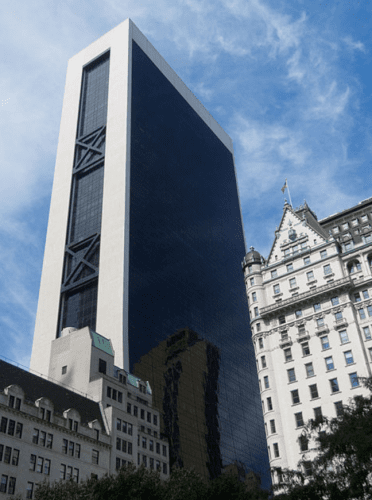 The workplace of Chandler does feature in the show and is available to visit in the heart of the city. The building is called the Solow Building, located just west of Fifth Avenue between 57th and 58th street. His office featured in quite a few of the shows, and it’s quite an imposing sight. Built in 1974, the building has 49 floors. There was an ongoing joke in the show, no one seemed to know what Chandler did for a living and, it certainly came back to haunt Rachel in ‘The One With The Embryos’.

There are a host of other places around the city that you’ll recognize from the show, from the Plaza Hotel to the West Village playhouse, but those that appear to be hidden in plain sight strike a chord with the true Friends fan. But we hope you liked our little look at what makes Friends so popular, and maybe if you’re heading over for a short break to the city, be sure to take in some of the sights of one of the most loved programs in the world.

Previous Post: « 5 Home Improvement Projects You Need To Complete This Year
Next Post: What You Need To Know About DISNEY World’s 50th Anniversary »